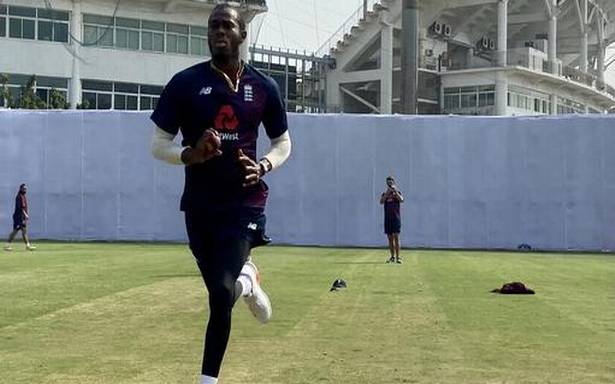 Brings about pressure with his speed and accuracy, creates avenues for other bowlers in the team

Jofra Archer delivers balls for fire. And torments the batsmen with genuine speed and vicious bounce. Actually, he breathes fire too.

Few pacemen hit the batsman’s helmet as consistently as the hostile Archer does. The ball climbs so quickly and so sharply that the man with the willow often does not have time to react. And the damage is done.

Archer also speaks his mind. When asked about crowds being allowed into the stadium for the second Test, he said in an interactive media session on Tuesday,

He agreed that crowds added lustre to a game. “When kids come to see us play, it helps the next generation.”

He is an impact player. In fact, the 25-year old Archer’s influence extends beyond 38 wickets in 11 Tests. He creates pressure with his speed and accuracy, creates avenues for others.

The fast bowler said the red SG ball posed its own challenges. “I have not seen a ball like that,” he said.

He was unwilling to comment on the wicket here “since a lot could change between now and Friday.”

On skipper Joe Root playing his 100th Test in Chennai, Archer said, “He is a great man-manager and great player. It is not surprising he has played 100 Tests. He will play many more.”

England has a busy schedule and Archer said, “Managing your body will be crucial.”

On those criticising England resting a few players to give them a break from the bubble, he said, “Anyone who criticises it has never seen a bubble. At the end of the day, humans are social people. They are enabling everyone to be fresh.”

The aspect that impressed him most about Jasprit Bumrah was consistency.

And who was the biggest threat in the Indian line-up? “Everyone from No. 1 to 6. Doesn’t matter who.”

For the Indian batsmen, Archer will be a threat to limb and psyche.