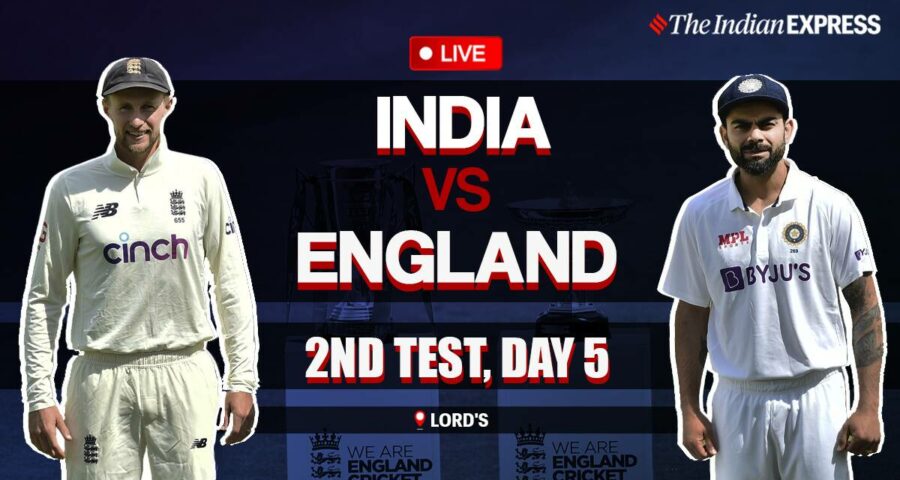 India vs England (IND vs ENG) 2nd Test Live Cricket Score Streaming Online Updates: If Rishabh Pant, with some help from the tail, can make a mark in the first session, England will be under pressure. If, however, England break through the Indian middle and lower order within the first session, they will be overwhelming favourites to win. India vs England (IND vs ENG) 2nd Test Live Cricket Score Online Updates: A cracking final day of the Lord’s Test is in the offing between India and New Zealand on Monday. At the start of the day, all three results are eminently possible. India have a lead of 154 runs in the second innings with 4 wickets in hand.

The morning is set to show the day on Day 5. If Rishabh Pant, with some help from the tail, can make a mark in the first session, England will be put under pressure. Given how England chased down a 280+ target on the final day of a Test at Lord’s vs New Zealand in 2004, the hosts can still pull off a final-day run chase, especially given the strength of their middle and lower order — Jonny Bairstow, Jos Buttler, Moeen Ali, Sam Curran. If, however, India can play out the most of the morning session, the hosts will have to earn their stripes and a 1-0 lead in the series. If the English bowlers can break through the Indian middle and lower order within the first hour of the day, England will have to considered overwhelming favourites to win.

A few gleanings from Nick Knight’s update on what the day looks like:

1. Overcast conditions are expected through the day. As is lateral movement. We’re thinking James Anderson!

2. Wood might be unavailable to bowl. Which might stretch England’s bowling attack if Pant and co can get a good start.

3. ‘Moeen and Jadeja will have a role to play, it’s still a good pitch to bat on,’ Knight says.

Gavaskar’s take on how much India need: 180-200. Gavaskar says India, if they use their bowlers well, will defend the score if they can add just another 30-40 runs.

Atherton says he has a ‘feeling’ it’s England’s day. Shaun Pollock says, voicing so many others, that he is excited to see what Rishabh Pant can do. As he does so, the camera shows Ravi Shastri having a discussion, hand on the youngster’s shoulder, Pant nodding thoughtfully.

Moeen Ali said England are looking to keep the 4th innings target down to 220. England chased 280+ vs New Zealand (courtesy Nasser, Strauss and Thorpe) on the final day of a Test at Lord’s in 2004. India’s lead is currently 154. You have to say, India would need around a 100 more runs to put the hosts under pressure. Of course, we have seen some miraculous final days before! Oh Ashwin!

Forgive us for our excitement for what should be acracking day of Test cricket. If you missed Kemar Roach’s cover drive which won the West Indies last night’s Test vs Pakistan by 1 wicket (!), worry not – Lord’s promises an equally exciting final day. The one thing which Indian fans would be ruing is the absence of Ashwin. With a thrill-a-minute final session of the day in the offing, and the pitch starting to crack up, Ashwin could have been the matchwinner with the ball that India could have had. All eyes on Rishabh Pant when the day begins in a little more than one more hour. James Anderson got his five-for with swing. Mohammed Siraj worked over Dom Sibley and Haseeb Hameed with seam. The second Test is now intriguingly poised after India wasted a golden opportunity to slam the door shut on the hosts. Against the visitors’ 364 all out in their first innings, England finished Day Two on 119/3.

As evening approached, Mohammed Shami dismissed a well-set Rory Burns to break an 85-run third-wicket partnership for England. It was a fitting end to a day when fortunes swung back and forth and no team could claim ascendency.

The start was anti-climactic. After a flawless first day of batting, KL Rahul got out to an Ollie Robinson half-volley off the second ball of the day. He drove the hit-me delivery but failed to keep it down to give a simple catch to Sibley at cover. The Indian opener looked guilt-ridden, although a full house at Lord’s stood up to applaud an excellent innings. Rahul’s 129 had 12 fours and a six, and a bucketload of application. (Read Full Day 2 Report)