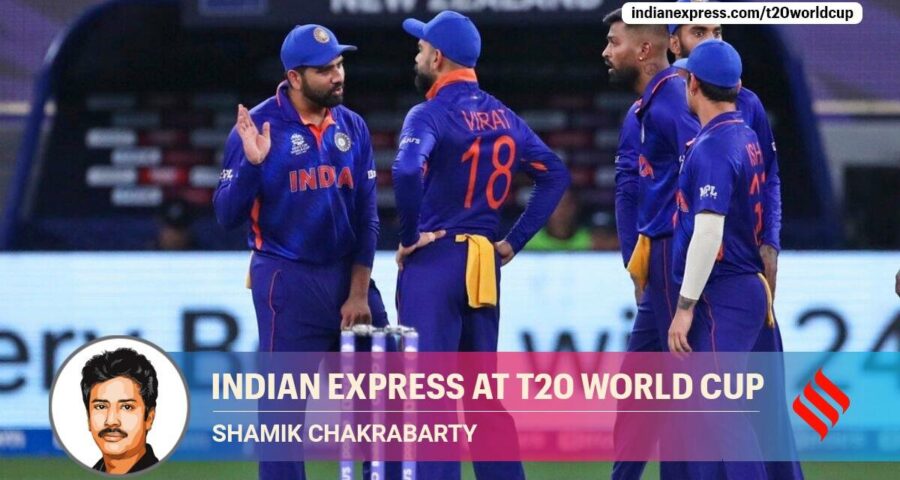 Will have to record a big win on Wednesday, before easier games versus Scotland and Namibia, to have any chance of making the last four. How does a team bounce back from two morale-crushing defeats when its cricket is not brave enough, by Virat Kohli’s own admission? How does a team return to winning ways when its bowling unit has taken only two wickets in two matches? How does a team motivate itself knowing that its fate at the T20 World Cup is no longer in its own hands?

Inclusion of fresh faces could help; some new players coming into the playing eleven against Afghanistan without carrying the excess baggage of back-to-back losses. Then again, it’s a double-edged sword. Axing is easy, the message it would carry might not be palatable. To start with, dropping a player would send a negative vibe; that he is a reason for the failure. It will also expose selection errors in the first two matches. India are in a no-win situation. Going into their third group league fixture, this is their biggest challenge. Afghanistan are incidental.

Much has been said about the side’s batting performances against Pakistan and New Zealand. Here are some bowling stats… Mohammed Shami has conceded 54 runs in 4.5 overs in two matches. Shardul Thakur gave away 17 runs in one-and-a-half overs against the Kiwis, coming in as Bhuvneshwar Kumar’s replacement. The latter looked pedestrian during his three overs against Pakistan, leaking 25 runs. The two spinners, Ravindra Jadeja and Varun Chakravarthy have accounted for 107 runs between them without a wicket. Hardik Pandya bowled a couple of military medium overs in the last game. Jasprit Bumrah aside, the other bowlers have fired blanks.

If Varun has been the team management’s attacking spin option, why did he bowl a negative length against New Zealand was a mystery, as if he was fearful of getting hit. A safer bowling strategy gave him a respectable economy rate but that didn’t serve his team’s purpose. Defending a paltry total, taking wickets at regular intervals was India’s only chance. Will Varun be persisted with? If not, who is his replacement, Rahul Chahar or Ravichandran Ashwin?

After nurturing wrist-spin for four years, why did India ditch the variety in the first two games was anybody’s guess. It hinted at a lack of faith in Chahar, picked ahead of Yuzvendra Chahal for being quicker through the air. Yes, Kohli was unlucky with the toss in both matches, for conditions have made chasing down targets easier at this World Cup. But hiding behind the dew factor would be equivalent to denial, a refusal to accept the fact that the team has failed to play to its potential.

Not many days ago, Rashid Khan almost won the game for Afghanistan, bowling second against Pakistan.

On Monday, on a dewy Sharjah evening, England’s Adil Rashid bagged two wickets against Sri Lanka, going at less than five runs per over. Australia’s Adam Zampa has claimed five wickets in three matches at an economy rate of less than seven runs per over. Sri Lanka’s Wanindu Hasaranga has taken 14 wickets from seven matches – Sri Lanka played the qualifiers also – conceding a shade over five runs per over. New Zealand’s Ish Sodhi has four scalps from two games with an economy rate of just over five-and-a-half runs per over. Pakistan’s Shadab Khan, too, has bagged a couple of wickets for less than six runs per over. Leg-spin so far has proved to be effective. Strange that India hasn’t used it at all, a side that banked heavily on wrist-spin post the 2017 Champions Trophy final.

Or, it could have been Ashwin even, based on his performance in the two warm-up games in the lead-up two the tournament proper. The senior off-spinners can take wickets in the Powerplay and he wouldn’t bowl with the fear of getting hit.

“Of course, execution could be better. Definitely. Could have bowled better. Secondly, I think the wicket definitely is (a factor) when you are bowling second,” India’s batting coach Vikram Rathour said at the pre-match press conference, adding: “And thirdly, I think we didn’t really put up enough runs on the board to create that pressure. Once you are looking to defend only 110, it gets easier for the team batting second.”

Given the larger outfield in Abu Dhabi, India could bring on Chahar or Ashwin for Varun.

As for batting, India’s T20 approach has always been an extension of their ODI batting template – keep wickets in hand upfront before throwing the kitchen sink at the death. When they lost wickets at the start – Pakistan game – their progress became chequered. When singles and twos dried up in the middle-overs – New Zealand game – they resorted to poor shot selection.

This template was fixed when MS Dhoni was the captain, but as England have been showing, T20 cricket has evolved. Batsmen need to be more adventurous now right from the outset without being silly. In fact, Dhoni’s Chennai Super Kings followed the method in the IPL this term, through Faf du Plessis and Ruturaj Gaikwad. India, with Dhoni their team mentor, remain old-school.

Rathour’s reply was a tad generic when he was asked about India not playing fearless T20 cricket. “I think that will happen with any team. Any international team will go through that.” The fact of the matter is that although India have quality batsmen top-down, Suryakumar Yadav is their tenuous link to batting adventurism.

India initially didn’t have a net session on the match eve, but later opted for an optional session. Yadav, who was ruled out against New Zealand due to back spasms, was seen doing some fitness drills before batting at the nets. He also did fielding practice like others. If he is declared fit, the middle-order batsman is likely to replace Ishan Kishan in tomorrow’s game.

Afghanistan have three good spinners. But there’s a gulf between the two sides and India’s real fight is against low confidence level. Some Indian expats like business tycoon and cricket patron Anis Sajan are refusing to give up and doing their maths. “If India concede 300 runs in their last three games and chase them down in 30 overs, their net run-rate would climb to +2.” Anis sounded optimistic. He owned two Abu Dhabi T20 League franchises and knows his cricket.

Embracing stoicism, however, the team is not looking too far ahead. “We won’t be good at maths anyways being cricketers. So I think at this time, at this moment, the focus is to play good cricket, to win games, to win the remaining three games,” Rathour said.