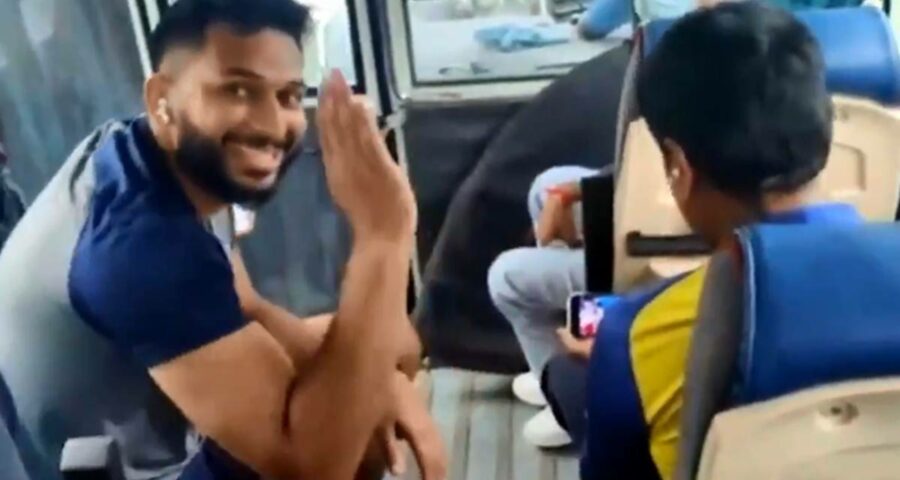 Meanwhile, far from the auction venue in Chennai, Shahrukh Khan, the cricketer, was on a bus in Indore with his Tamil Nadu teammates, following the auction on phone. Dinesh Karthik, KKR star and TN captain, would later tweet a video that captured the excitement of the bid that skyrocketed from Rs 20 lakh to Rs 5.25 crore.

The clip has an embarrassed IPL debutant giving a reluctant smile as squeals and claps greet every new bid. On a day when South African all-rounder Chris Morris became the costliest IPL cricketer ever, Rajasthan Royals signing him for Rs 16.25, Shahrukh was easily the most-sought after first-timer.

Speaking to The Indian Express, the 25-year-old is amused by the SRK connection but admits that he is a die-hard Rajinikant fan, watching the superstar’s movie Basha on loop. He also plays down the hype around his price tag. “The chance to play under K L Rahul and coach Anil Kumble and getting an opportunity to play a tournament like the IPL is something that excites me. Money is secondary,” he says.

IPL watchers may be surprised by Shahrukh’s price tag, but those following domestic cricket saw it coming. In his nascent first-class career, Shahrukh has displayed the ability to be a reliable finisher, the kind that makes T20 MVPs.

The 6-feet-4 inch big-hitter is that rare Indian player who has the temperament and skills to take his team across the line in tight games. The scramble to buy him proves that he is a rarity in a tournament where most teams depend on foreign players to seal games. In last month’s domestic T20 tournament, Syed Mushtaq Trophy, Shahrukh scored a 19-ball unbeaten 40 to win the game for Tamil Nadu.

When asked what makes him tick in tense chases, Shahrukh gives a nonchalant reply: “It’s just the hard word that has paid off. As far as the big hits go, I think I am naturally gifted.”

Having grown up in Velachery, a bustling commercial and residential area in south Chennai, Shahrukh had his fill of tennis-ball cricket before progressing to age-group games.

Despite the early highs, he had to wait for four years before cementing his spot in Tamil Nadu’s Ranji Trophy and limited-over squads. “We picked him purely on his natural ability in the 2014-15 season. Back then, the TN team was filled with superstars in their prime — Dinesh Karthik, Murali Vijay, Abhinav Mukund, Subramanian Badrinath. So, he didn’t have a readymade spot open. He was in the reserves for four years before he finally made his debut in 2018,” says Sharath T N, former Tamil Nadu selector. Those four years on the fringes were tough. After stacking up over 600 runs in the Cooch Behar Trophy in the lead-up to the 2014 Under-19 World Cup in the UAE, he was expecting a call for the showpiece ICC event. “I was working really hard in that period. But if you get benched for four consecutive seasons, it begins to play on your mind. When I failed to make the U-19 World Cup squad, it shattered my confidence,” he says.

Shahrukh’s father Masood, a former club cricketer, is in the leather business while his mother Lubna runs a boutique in Chennai. He says it was his parents and personal trainer Azhariah Prabhakar who gave him the confidence to keep going. “Azariah has played a key role in my development as a cricketer,” he says.

In fact, Shahrukh was expecting an IPL call last season. He had even attended a Mumbai Indians trials, but drew a blank. To make matters worse, he injured a finger.

As Sharath says, good things happen to those who remain patient and are hard-working. “He has been playing the waiting game for far too long. First, to cement his spot in the Tamil Nadu team and now in the IPL. He deserves it. I hope he makes use of this opportunity,” he says.

Shahrukh, though, has his hands full. The IPL is still more than two months away. Before that, he will need to play a vital role for his state in the Vijay Hazare Trophy for which the team is currently in Indore.

vishal menonBut then, with Thursday’s auction, this Shahrukh Khan has already scored a box-office hit.