How ironic that the southpaw's replacement as SRH captain, Kane Williamson, was at the receiving end of Warner's power-punch at the T20 World Cup final. 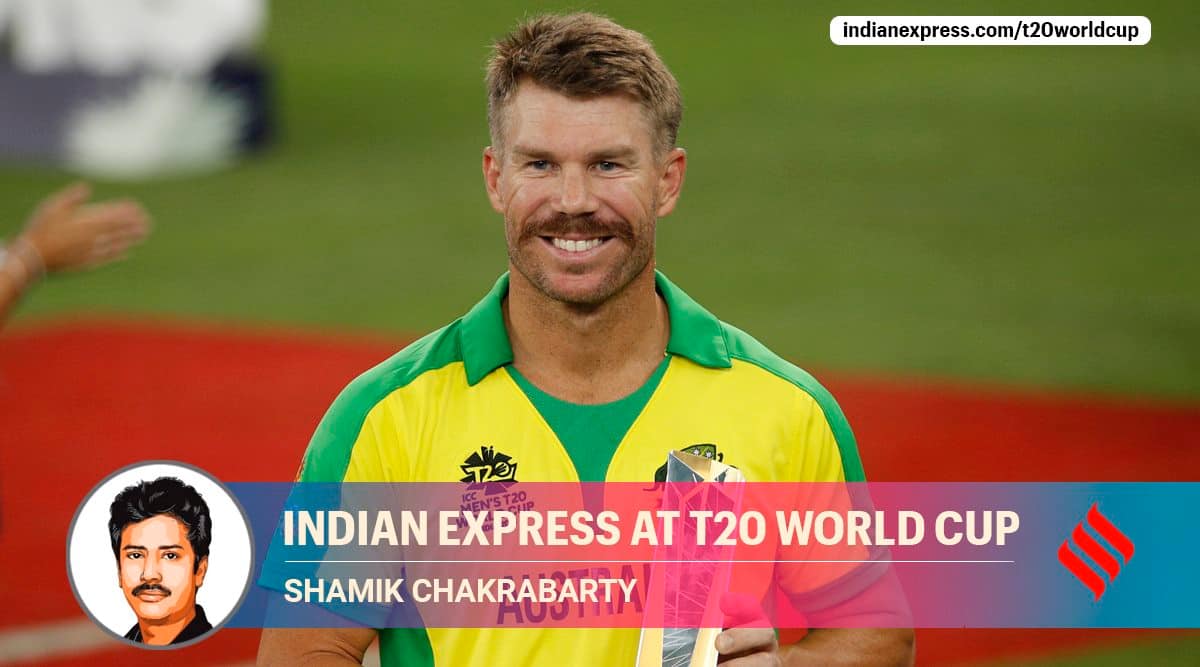 After a T20 World Cup, where David Warner let his bat do the talking, his family and mates opted to be sarcastic.

A post popped up on Candice’s Twitter handle, quoting a Cricket Australia tweet that showed Warner’s run in the final – 53 runs, 38 balls, four fours and three sixes. “Out of form!!” wrote Warner’s better half, who herself has gone through a lot, including a miscarriage, during the Sandpaper-gate controversy.

Cut to Aaron Finch’s post-match press conference, where he was told that ‘no one expected that he (Warner) would be the Man of the Tournament’. The Australia white-ball captain had a counter question. “You didn’t expect that? I certainly did.” The sarcastic rebuttal was followed by how Finch had pre-empted an upsurge in Warner’s form. “Without a word of a lie, I promise you, I called Justin Langer a few months ago and said, ‘Don’t worry about Davey, he will be Man of the Tournament’.”

Finch’s personal choice, though, for the Player of the Tournament was Adam Zampa, the leg-spinner who finished the tournament with 13 wickets from seven matches at an economy rate of less than six runs per over. “I thought Adam Zampa should have been Man of the Tournament personally.”

But how did Warner turn the corner? His captain gave an insight into the player’s personality. “… he’s a great player. He’s one of the all-time great batters. And he’s a fighter. He’s someone who when his back is against the wall, that’s when you get the very, very best of David Warner. It was a special finish to the tournament for him, the last couple of knocks.”

Befittingly and exhilaratingly for Warner fans, the Dubai International Stadium was the venue for Warner’s redemption. On October 3, when Sunrisers Hyderabad played their IPL game against Kolkata Knight Riders here, the team’s erstwhile skipper was seen performing a cheerleader’s role, waving the franchise’s flag from the stands. Out there in the middle, SRH laboured to 115/8 in 20 overs. In fact, after his captaincy was taken away mid-tournament, Warner reportedly wasn’t allowed to travel with the team for their match against Chennai Super Kings.

“The disappointing thing for me was not being explained why I was dropped as captain,” he was quoted as saying by Sports Today.

How ironic that the southpaw’s replacement as SRH captain, Kane Williamson, was at the receiving end of Warner’s power-punch at the T20 World Cup final as New Zealand captain. But as was evident, the two excellent cricketers didn’t have a fall-out. After the final, Williamson gracefully walked up to the Australia opener to offer his congratulations.

Clearly, Warner needed the right team environment to regain his mojo. “The vibe around the group has been unbelievable. Just how well everyone is getting along, like I said earlier, there’s a lot of time spent in each other’s rooms and the team room and just chilling out at lunches, dinners and breakfast and everything has had it all together. Yeah, I think that just adds to the environment,” Finch said.

How success helps change the narrative… Only about three months ago, dressing-room leaks had suggested player revolt against coach Justin Langer for the latter’s allegedly stroppy temperament. That was in the wake of the team’s dismal performances on the tours of the West Indies and Bangladesh.

It was bad enough for Usman Khawaja to turn on his teammates. “I think the more important and disappointing thing is the players haven’t stood up and chatted to JL about this a long time ago. Things are still coming out in the media,” Khawaja had said on his YouTube channel.

On Sunday, after Australia’s maiden T20 world title, Finch was asked about Langer. “JL has played a part in that (creating a positive vibe) as well, and yeah, that’s a great reward for him as well as the players,” he said.

Coming back to Warner, with two new franchises in the IPL, it would be interesting to see how things pan out for the 35-year-old on the back of his 289 runs from seven matches at the T20 World Cup.

“I always felt good, for me it was about going back to basics, getting on some hard, synthetic wickets in order to hit volumes of balls,” Warner said at the post-match presentation.