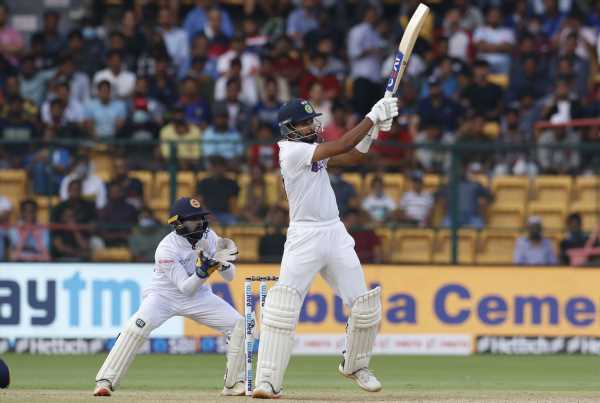 Playing under lights with a pink ball in a Day-Night Test is challenging; most teams and their players are yet to adjust to it.

However, Shreyas Iyer, who played his first Test under lights in the just-concluded series against Sri Lanka, at the M Chinnaswamy Stadium in Bengaluru, had a different approach, and his attacking style pay rich dividend to the team.

His 92-run knock in the first innings helped India post 252, after the team was tottering at 148 for 6 at one stage.

“That wasn’t my normal approach, but when I saw other batters struggling, I knew I had to attack. I was just trying to be one step ahead of the bowlers.

“When the tail came in, I was on 55 and I added 37 more. So I wasn’t too bothered about missing out on a hundred,” said Iyer, at the post-match presentation ceremony after India won the second Test by 238 runs on Monday.

In the second innings too Iyer, who was voted ICC ‘Men’s Player of the Month’ for February, top-scored with 67, playing an important role in India’s total of 303 for 9 declared.

“We were given a target, and I was in the mindset to play as many balls as possible.

I have always dreamt about being a Test player for India and playing alongside the greats and contributing at the highest level.

“I hope I can maintain that consistency in the time to come,” added Iyer, who was named the ‘Player of the Match’.