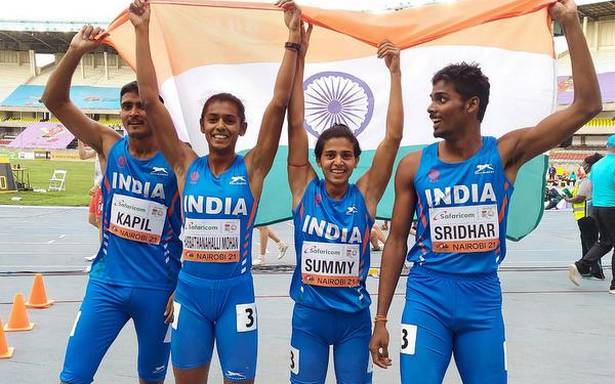 Despite being the country’s fastest quartermiler, Priya H. Mohan had been left out of the Indian 4x400m mixed relay team for the Tokyo Olympics as she was not a national camper.

But on Wednesday evening, the 18-year-old from Karnataka produced a strong second leg as India won the mixed relay bronze at the World athletics under-20 championships in Nairobi.

It was the country’s first-ever medal in a relay event at the global level and the team, comprising Bharath Sridhar, Priya, Summy and Kapil, clocked a season-best 3:20.60s to better the time (3:23.36) it had posted in the heat in the morning.

Abdul Razak had run the opening leg in the morning but the team management replaced him with under-20 Federation Cup champion Bharath Sridhar for the final. And when Priya took the baton for the second leg, she was in the fourth position but the national champion worked her way up nicely to help India the third spot.

The next two runners, Summy — who manoeuvred through the traffic smartly at the start of the third leg — and Kapil also did an impressive job to help India to a memorable bronze, behind Nigeria (3:19.70s) and Poland (3:19.80).

Incidentally, it was the third quartermile of the day for the two girls. In the morning, nearly two hours after the relay heat, Priya was back on track for the individual 400m and entered the final after finishing third in her heat. She clocked 53.79s and qualified as one the two fastest losers.

Summy, the other Indian in the event, finished fifth in her heat and 12th overall in 55.43s and failed to make the cut.

There were no surprises as the two Indian javelin throwers, Kunwer Ajay Raj Singh Rana (71.05m) and Jay Kumar (70.34), progressed to the 12-man final after finishing sixth and seventh overall in the qualification round.

Amandeep Singh Dhaliwal (17.92m) also advanced to the final in men’s shot but hammer thrower Vipin Kumar failed to make the cut, finishing 10th in his group and 20th overall with 63.17m.

He had a personal best 68.94m while winning the under-20 Federation Cup early this month.

Some of the world’s top countries, including USA, Australia, China, Britain, Germany and Japan have skipped the under-20 Worlds owing to the global pandemic.