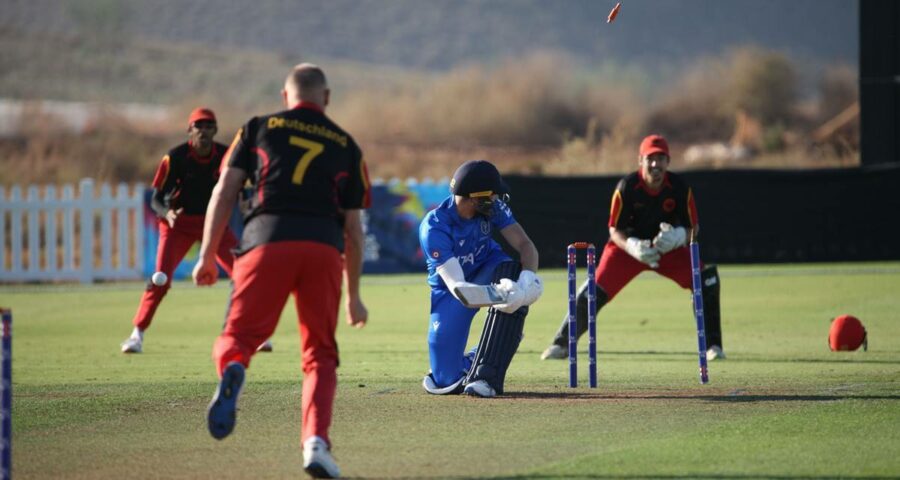 Not just Germany, but teams such as Samoa and Kenya, too, barged onto the scene while the likes of Kazakhstan and South Korea have started winning regional tournaments. If cricket is a religion in many parts of the world, then T20 is its missionary spreading the gospel to newer lands.

Starting Saturday, the big boys of world cricket will get the main event underway after an opening act that, by and large, went unnoticed. Many purists might be tempted to describe the T20 World Cup as the lesser World Cup. But a realist would know this, inevitably, is the future.

For all barbs flung at it, T20 is turning out to be cricket’s best vehicle, perhaps the only one, to shatter the image of being a mere Commonwealth legacy. From America to Afghanistan to Brazil, Thailand and even Germany, T20 has taken cricket to previously unexplored countries, to a point that the sport is now able to make a genuine claim to be at the Olympics.

On Thursday, around the time when Scotland, for the first time, made it into the main rounds of the T20 World Cup, football powerhouses like Italy, Germany and Brazil were taking small, yet significant, steps in the cricketing arena.

While Brazil continued their unfettered march in the women’s game by defeating Canada, Germany, despite losing to Italy, entered the global qualifying round of the T20 World Cup for the very first time. “One of our players even took a hat-trick,” German cricket’s general manager Brian Mantle says. “Imagine, the first player to take a hat-trick in T20 Internationals was Brett Lee. And the 21st is a German player.”

And therein lies a story. Cricket’s T20 version is faster, requires unique skill-sets and provides wholesome, all-round entertainment. But at the same time, it also has democratised the sport. Just like the way 7s has done for rugby, 3×3 for basketball and the indoor variant, possibly 5s in the future, for hockey.

A lower financial commitment and shorter duration – also the fact the shorter versions of rugby, hockey and basketball require half the number of players to be good – have given teams with little to no history a chance to rub shoulders with the best and, on occasions, even beat them; like Scotland did to Bangladesh in the first round of the T20 World Cup.

In hockey, countries that aren’t even a blip on its landscape in the traditional 11-a-side game are up there among the best in the indoor format. At the top of the indoor hockey chart is Austria, with Iran ranked third in the world, followed by Russia and the Czech Republic – Germany is the only traditional hockey power in the top five. And at the Tokyo Olympics, Mongolia fielded a team in 3×3 basketball, which was the first time ever the country competed in a team sport at the Games.

The crossovers between cricket and rugby, however, are particularly intriguing. The traditional formats of both these games are enshrined in traditions; a lot of emphasis is laid on quality and, by extension, they have remained closed sports. Their shorter versions, however, are breaking into previously uncharted territories.

In rugby’s case, the inclusion of 7s in the Olympics aided its unshackled growth. “A country like Germany is very good in 7s rugby, one of the best teams in Europe, because that is the Olympic sport. And so, the Olympic federation will invest in Rugby 7s,” Mantle says.

Not just Germany, but teams such as Samoa and Kenya, too, barged onto the scene while the likes of Kazakhstan and South Korea started winning regional tournaments. Of course, the most heart-warming story of the last decade as far as 7s is concerned has been Fiji. A decent 15s outfit, Fiji has come of age in the shorter format to dethrone the All Blacks and become the undisputable kings of 7s, having won back-to-back Olympic titles.

As more and more teams got better at 7s, the sport has also matured. Initially seen as a development tool wherein players looked to improve their running and passing, 7s has now divorced from its original format and, as former Wales international John Taylor once noted in his ESPN column, the players are forced to make a choice whether they want to concentrate on 7s or 15-a-side rugby.

T20 is, in some ways, following a similar trajectory. T20 specialists, who were once a rare breed, are a norm now. And a cursory glance at ICC’s ranking table tells the story of how far the game has reached: 10 teams are ranked in Tests, 20 in ODIs but T20Is have 86 nations; in women’s cricket, 10 teams are ranked in ODIs and 56 in T20Is.

As one sifts through the usual suspects, the T20I chart throws up some fascinating names: Thailand, made mostly of indigenous talent, are knocking on the door of the top-10 of women’s ranking; Brazil, also with home-grown players, are marching up the ladder so fast that they now have annual contracts for their women players; and on the men’s side, 15th-ranked Papua New Guinea has 3,00,000 kids playing cricket at school level.

One wonders if the impending inclusion of cricket in the Olympics will have the same impact on the sport as 7s had on rugby. At the moment, however, the simple reason why there are more countries playing T20 cricket is that it is the only format ICC allows them to play.

“A country like Germany is not allowed to play official ODI cricket, and definitely not Test cricket. So, the only thing that’s left is to play T20I,” he says. “The other thing is, we don’t have money. If you play ODI or Test match cricket, it takes a lot of time. And if we are going to become exciting for German people, who don’t know cricket, they are not going to watch a Test match for five days. They need a short, fast, interesting game.”

Perhaps, nothing better illustrates the launchpad that T20 cricket is than the rise of Afghanistan, who could be for T20 what Fiji are for 7s. “We are good at T20 because that’s the format in which we get maximum exposure, apart from the fact that it is financially viable,” says former Afghanistan Cricket Association chief executive Shafiq Stanikzai.

Despite their troubled build-up, owing to the recent situation at home, Afghanistan are expected to notch up a surprise or two at the T20 World Cup. The impact of Afghan players, however, goes beyond the country’s borders. Cricketers from Afghanistan have played a critical role in German cricket’s recent surge as well. “In the last five years, a lot of refugees have come from Afghanistan to Germany, about 2,00,000, and every second one is a cricket fanatic. A lot of them played cricket and a couple are in the national team,” Mantle says.

Even though it is unlikely that anyone other than the traditional powerhouses will win the T20 World Cup, teams like Afghanistan and Scotland, who defeated Bangladesh in the first round of the ICC event, have shown that with each passing edition, it could get harder and harder to beat them.

And that is inspiration enough for other associate nations. “These guys are our role models. Scotland’s target is to get on the field against England, India, Pakistan… to play them and sometimes beat them. In the same way, it’s our target to get on the field with Afghanistan, Scotland, Ireland or the Netherlands; to play them, see how good we are compared to them and maybe one day to actually beat them,” Mantle says. “If one day, we could do what they have done, it would be great. It’s a long way to go, though.”