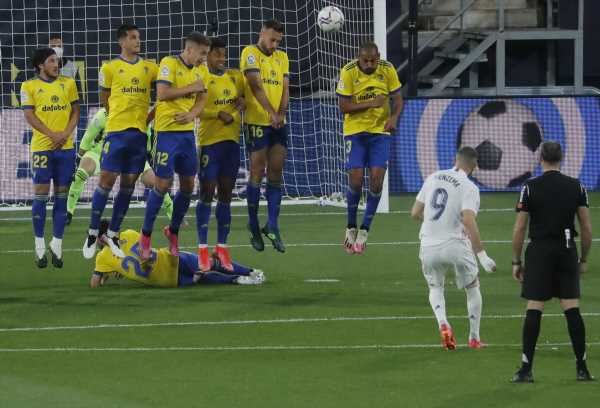 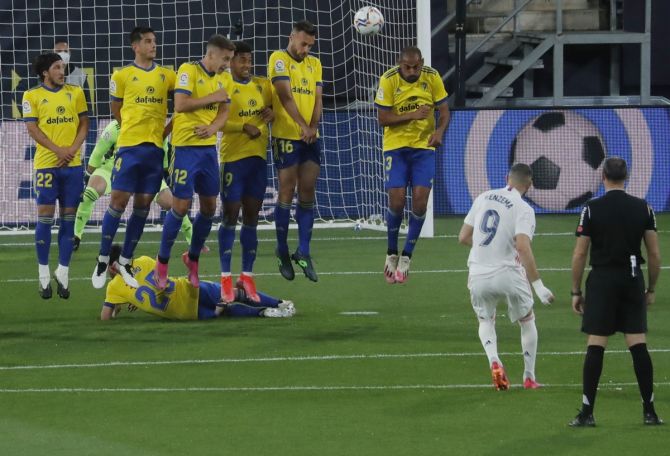 A first-half double from Karim Benzema helped Real Madrid cruise to a 3-0 victory away to Cadiz on Wednesday that moved them top of La Liga.

The Frenchman’s brace came either side of a maiden senior league goal for defender Alvaro Odriozola, as Real moved onto 70 points, level with city rivals Atletico Madrid, who have a game in hand, but top due to their better head-to-head record.

“We started the game really well, robbing the ball high, that was the gameplan,” Madrid defender Marcelo said.

“We know there are no easy games in La Liga, it might have seemed like an easy win, but we were really good.

“Madrid never give up. We’ll fight (for the title) until the end in every game we have.”

The home side, who were looking to complete an unlikely league double over Madrid, started brightly, with Jens Jonsson firing narrowly wide, however that was as good as it got as Real’s class told.

Benzema netted his first from the penalty spot on the half hour following a VAR intervention, which spotted an Isaac Carcelen foul on Vinicius that referee Antonio Mateu Lahoz had missed.

The striker’s goal took him level with club great Raul Gonzalez as having scored against 35 different opponents in La Liga.

He turned provider three minutes later when he crossed for Odriozola.

Casemiro should have made it 3-0 moments later when he fired over from close range, however five minutes before the break he crossed for Benzema, who completed his double to seal the points for Zinedine Zidane’s side.

Juve climb into third after coming from behind to beat Parma 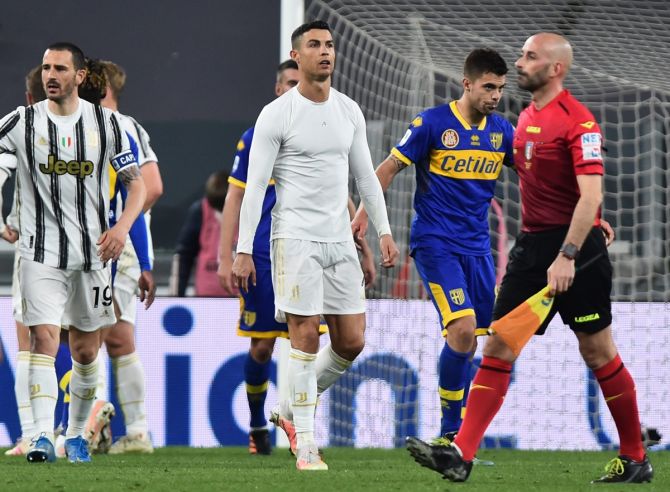 Juventus came from behind to beat Parma 3-1 on Wednesday to climb back into third in the Serie A standings.

Second-bottom Parma looked to be in with a chance of earning three priceless points in their relegation battle when Gaston Brugman fired a low free kick into the net in the 25th minute to give the visitors a shock lead.

Yet a double from fullback Alex Sandro turned the match on its head either side of halftime, with another defender — Matthijs de Ligt — heading a third in the 68th minute to put the game to bed.

Juve saw out the win with ease to move onto 65 points from 32 matches, one ahead of Atalanta, who play AS Roma on Thursday, while Parma remain in deep trouble in 19th, 11 points from the safety zone. 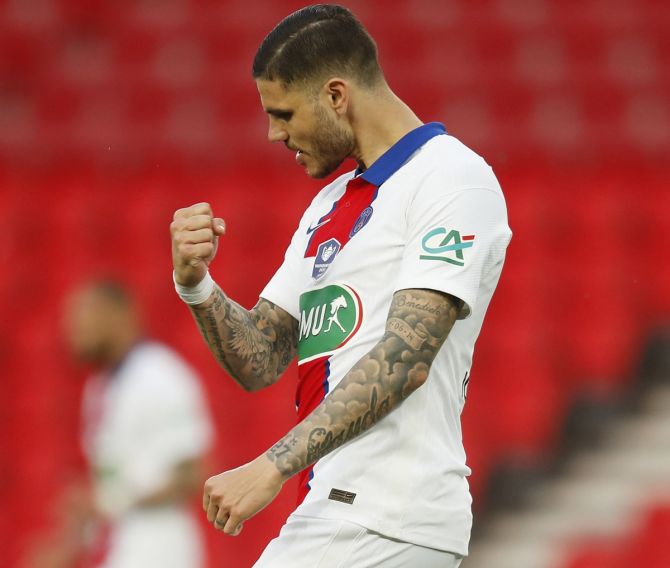 Striker Mauro Icardi scored a hat-trick as Paris St Germain eased into the French Cup semi-finals with an emphatic 5-0 victory over Angers and AS Monaco joined them with a 2-0 win over 10-man Olympique Lyonnais on Wednesday.

Icardi’s early strike for PSG was followed by an own goal from Angers defender Vincent Manceau and a simple headed third from Neymar in the second half, before the Argentine striker added two more.

The defending champions, who have appeared in the last six French Cup finals, winning five, hit the front inside nine minutes with an excellent team goal that was finished by Icardi from Julian Draxler’s pin-point through ball.

There was good fortune about the second as Neymar’s shot from close-range hit goalkeeper Ludovic Butelle, before rebounding onto Manceau and back into the net.

Neymar headed in from close range before a brilliant run in the box from Angel Di Maria put a second on a plate for Icardi, who then added another late on for his fifth goal in the last three games.

Lyon dominated the first half against visitors Monaco but were held scoreless, and the game slipped from their grasp early in the second period.

Lyon’s Maxwel Cornet had a goal correctly ruled out for offside, before Sinaly Diomande was sent off for a second bookable offense for his role in giving away a penalty.

Wissam Ben Yedder converted from the spot for Monaco and set up Kevin Volland for a thunderous strike to make it 2-0.

Lyon had earlier lost coach Rudi Garcia to a red card after a show of dissent to referee Stephanie Frappart.

Montpellier and fourth division Rumilly-Vallières, who stunned second-tier Toulouse on Tuesday, are the other sides to reach the semi-finals.