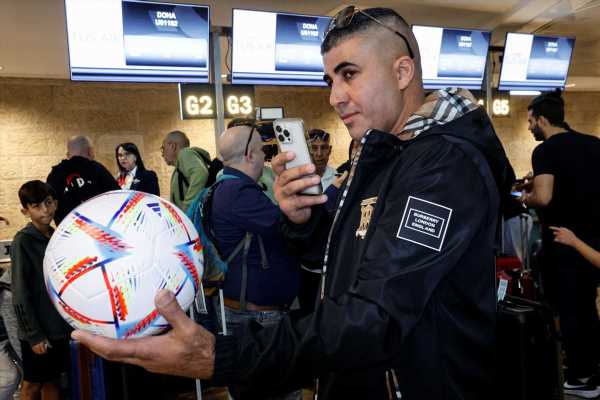 Balloons in the national colours of Israel and Qatar festooned the departure gate for the first commercial flight between the countries on Sunday, permitted by Doha for fans of the World Cup despite the absence of formal bilateral relations.

The passengers’ excitement was mainly at being able to attend the soccer tournament – for which Israel did not qualify – with such surprising ease. But several also voiced hope that the temporary non-stop connections would clear the way to fuller detente between the Gulf emirate and Israel.

They were issued contact cards for a discreet Israeli consular delegation sent ahead to provide emergency support – a reminder of their current semi-recognised status in Qatar, which is close to Iran and has hosted leaders of Palestinian Hamas.

“There were a few concerns, I cannot deny that,” said Sagi Ashkevitz, who was flying out with three friends to his second World Cup.

“But in the end, the idea of watching (Argentina forward Lionel) Messi for the last time, together with the idea that we are actually making history, overcame all of the concerns, and we are happy to be a part of it.” At least 10,000 Israelis are expected at the month-long matches, most of them coming through third countries. Those boarding the TUS Airways plane at Ben Gurion Airport had originally been told they would have a brief stopover in Cyprus.

But they got a non-stop three-hour connection instead, thanks to a deal announced by FIFA last week which it described as allowing Palestinians as well as Israelis to fly direct.

While Sunday’s passengers including both Israeli Jews and Arabs, there was no one from the Palestinian territories. According to Gabriel Mizrahi, CEO of ticketing agent Tiktik, this was due to having booked the flight in May, when his Palestinian clients preferred indirect routes through neighbouring Jordan. 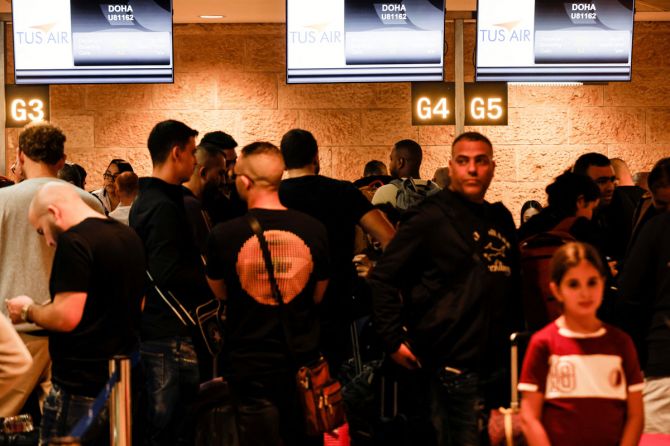 Six more Tel Aviv-Doha flights for the World Cup have been approved so far, Mizrahi said. Return tickets cannot be bought separately, he said – a means of ensuring that those who fly back are the same passengers cleared by Ben Gurion security.

At least two of the fans said they would attend matches in which Israel’s arch-foes Iran are playing.

“I’m going to sit on the Iranian side of the stadium,” said Shlomi Lakash, wearing a baseball cap whose colour – Islamic green – he joked would help him blend in. “God is with me.”

Riad Ziadna, a member of Israel’s Arab minority who held a soccer ball as he stood in the check-in line, said he believed the World Cup would be “the starter’s pistol for coexistence all over the Middle East”.