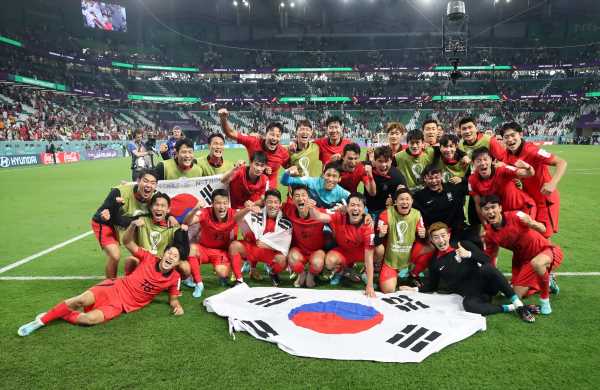 The FIFA World Cup knock-out phase kicks-off on Saturday in Qatar. Here’s an overview of the teams advancing to the last 16.

Argentina clawed back the top spot in Group C with wins over Mexico and Poland after a shocking loss in the opener against Saudi Arabia. They will next face Australia on Saturday.

La Seleccion was able to give a last chance to win the trophy to captain Lionel Messi, who has announced his intention to retire from the national team after the tournament.

Argentina won the World Cup in 1978 and 1986, and reached the final on three more occasions, most recently in 2014 when they lost against Germany.

Australia claimed a spot in the last 16 as Group D runners up with 6 points from wins over Tunisia and Denmark. They go on to face Argentina on Saturday.

This is the sixth World Cup for the Socceroos and their fifth in a row. In 2006 they reached the Round of 16, falling to eventual champions Italy.

Brazil booked their ticket for the knock-out stage with back-to-back wins against Switzerland and Serbia, followed by a 1-0 loss to Cameroon. They will face South Korea on Monday as the winners of Group G.

The Selecao have claimed the World Cup five times and are the pre-tournament favourites to win a record-extending sixth title.

Brazil have played in every World Cup since 1930 but have not reached the final since they last won the title in 2002.

Croatia joined the last 16 after two goalless draws with Morocco and Belgium and a 4-1 victory over Canada. They will next face Japan on Monday as the runners up of Group F.

This is the sixth World Cup for Croatia, who were beaten by France in the 2018 final.

England punched their ticket to the knockout phase as top of Group B with 7 points, following emphatic victories against Wales and Iran and a goalless draw with the United States.

The Three Lions, who reached the Euro 2020 final last year, will face Group A runners up Senegal on Sunday.

England’s only World Cup win dates back to 1966. They finished fourth overall in 2018.

Another favourite to win the tournament, reigning champions France delivered on expectations and became the first team to qualify for the last 16 with consecutive Group D wins over Australia and Denmark, followed by a 1-0 loss to Tunisia.

Led by AC Milan striker Olivier Giroud – who tied Thierry Henry as top scorer for the national side at 51 international goals – Les Blues are set to face Poland on Sunday.

Japan surged into the last 16 as the unlikely winners of Group E after the Samurai Blue staged two stunning comeback wins over Germany and Spain, losing only to Costa Rica. They will face Croatia on Monday.

Morocco topped Group F with wins over Canada and Belgium following a goalless draw with Croatia, and is slotted to play against Spain on Tuesday.

This ties the country’s best World Cup result ever as they reached the last 16 only once before, in 1986.

The African side, playing in their fifth World Cup, in 2018 failed to qualify for the knockout stage after getting only one point in three matches.

The Netherlands secured a place in the last 16 with victories over African champions Senegal and hosts Qatar, topping Group A despite a 1-1 draw with Ecuador.

The Dutch – unbeaten in the last 18 games after their elimination at Euro 2020 – will face the United States on Saturday.

The Netherlands have been runners up at three World Cups in 1974, 1978 and 2010. This year marks their return to the international stage after they failed to qualify in 2018.

Poland clinched a spot in the last 16 as runners up of Group C after a win over Saudi Arabia, a draw with Mexico and a loss to Argentina. Poland closed the group stage tied with Mexico and advanced thanks to goal difference.

The Polish side had not reached the knockout stage of the tournament since 1986 after finishing third in 1974 and 1982.

Portugal – already qualified after back-to-back wins over Ghana and Uruguay – finished Group H with a defeat by South Korea but held on to their top spot to face Switzerland on Tuesday.

Portugal’s best World Cup result is a third place in 1966. Most recently, they won the Euro 2016 in France.

Currently a free agent due to a bitter divorce from Manchester United, captain Cristiano Ronaldo became the first male player to score at least one goal in five different World Cups after netting a penalty in the opener against Ghana.

Senegal qualified for the last 16 with a decisive 2-1 victory over Ecuador, and will face England on Sunday.

The reigning African Champions started the World Cup with a loss to the Netherlands, but were able to turn their fortunes with a 3-1 win over hosts Qatar.

This is the third World Cup appearance for Senegal, who reached the quarter-finals in 2002.

South Korea clinched entry to the knockout stage with a last-gasp win over already-qualified Portugal, following a goalless draw with Uruguay and a loss to Ghana.

The team, led by Tottenham striker Son Heung-min, placed second in Group H and squeezed into the last 16 ahead of Uruguay on goals scored. They will next face Brazil on Monday.

South Korea, whose best World Cup result is fourth place in 2002, missed the knockout phase in the last two editions of the tournament.

One of the favourites to win the tournament, Spain clinched a spot in the last 16 with a blowout against Costa Rica followed by a draw with Germany and a loss to Japan.

After an early elimination at the hands of Russia in 2018, a rejuvenated La Roja – with 14 players under the age of 25 – will meet Group F winners Morocco on Tuesday.

Switzerland secured the runners-up spot in Group G with a 3-2 win over Serbia and a victory over Cameroon, and will go on to play Portugal on Tuesday.

The Swiss, who are seeking to match their record result and reach the quarter-finals, have now made it into the last 16 in four of the last five World Cups.

The United States qualified as runners up of Group B after a 1-0 victory over Iran in a match overshadowed by political tension, following draws with Wales and England.

They will meet the Netherlands in the first match of the knockout stage on Saturday.

The US national team has taken part in 11 World Cups, and never topped their third-place finish of 1930.