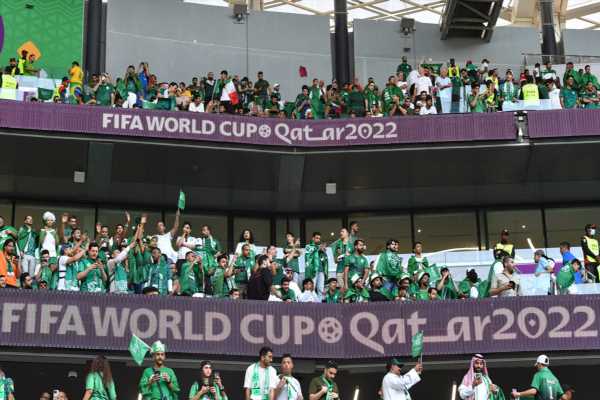 After savouring Saudi Arabia’s historic World Cup victory over Argentina, Arab fans are hoping for a Saudi win against Mexico to keep the team in the tournament, while praying for a miracle for Tunisia as it takes on France on Wednesday.

The Qatar World Cup, the first to be hosted in the Middle East, has been a cause for celebration among many Arabs thanks to Saudi Arabia’s defeat of two-time champions Argentina and a shock victory for Morocco over Belgium in the group stage.

“There is a big solidarity between us, Morocco, Tunisia, Qatar and Saudi Arabia. We support each other,” said Morocco supporter Khalim Farouki, 25, in Doha.

The performances have generated a shared sense of pride among many Arab fans despite the numerous political tensions that crisscross their volatile region.

“Look at what Saudi Arabia and Morocco have done. We are very happy with what the Arabs have achieved,” said Tunisian Imed Layouni, who plans to take off his evening work shift to watch both the Tunisian and Saudi matches at a Tunis cafe.

“Saudi Arabia’s performance against Argentina was really very honourable to every Arab. We support strongly this great team. We hope that it will be crowned with a Tunisian and Saudi victory today,” he said.

While Tunisia may struggle to get through, he is hoping for a good performance to lift people’s spirits in a country facing an economic crisis: “Tunisians need joy. Nothing is going well here.”

Morocco, in second place in their group but tied on 4 points with top team Croatia, play their final game of the group stage against Canada on Thursday.

Host nation Qatar have already been knocked out.

Tunisia’s chances of progressing are slim. Not only must they defeat the champions and two-time World Cup winners France, who top the group with six points but they must also hope for a favourable outcome in the other group match between Denmark and Australia, which is second with 3 points.

“It’s a good feeling, the first time (a World Cup is hosted) in an Arabian country. We support all of them,” said Ali Abbas Moussa, a 30-year-old pharmacist from Iraq.

Some Arab leaders attending the World Cup have echoed the sense of pan-Arab solidarity during matches.

Qatar’s Emir Sheikh Tamim bin Hamad al-Thani and Saudi Arabia’s Crown Prince Mohammed bin Salman, who have mended ties after years of animosity, wrapped scarves and flags of each other’s country around them as they watched their matches.