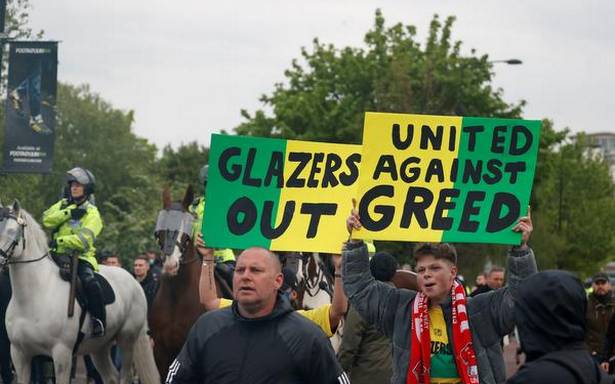 The unrest among football fans in England has existed well-before the recent ESL debacle – among their biggest demands are the implementation of the German 50+1 rule and an Independent Football Regulatory body.

Although there have been several isolated instances of fan protests against club ownership throughout the years in England, for the first time the game is seeing a united front asking for greater fan representation in the running of their football clubs.

The recent European Super League (ESL) debacle has been described as a ‘tipping point’ for the sport cherished across continents.

Why are fans protesting?

Fans of many lower league sides like Blackburn Rovers, Coventry City, Bury F.C., Blackpool F.C. and Charlton Athletic have been raising their voices against growing debts, lack of spending and maintenance, and owners’ withdrawal of revenue and profits from the clubs.

However, most Premier League clubs had hitherto been silent on the issue, barring Arsenal and Manchester United.

In 2004, amid talks of the Glazer family taking over majority shares of Manchester United, the fans set up ‘Shareholders United’, comprising those who owned 17% of shares in the club to combat the takeover. In May 2005, FC United of Manchester was formed as a breakaway club for the supporters who did not agree with the takeover. Ever since the takeover, there have been several campaigns like ‘Love United, Hate Glazer’ and ‘The Green and Gold’ movement, despite the club’s success under Sir Alex Ferguson’s regime.

Similarly, the turn of 2010s saw protests against Arsenal’s sole shareholder Stan Kroenke. Organised efforts like the black scarf movement were made to protest against rising ticket prices, commercialisation and lack of investment in the team.

Liverpool has also seen sporadic fans’ protests with a mass walk-out in 2016 against rising ticket prices, outrage over owner Fenway Sports Group’s attempt to trademark the name ‘Liverpool’ in 2019 and criticism against the decision to furlough non-playing staff during the coronavirus pandemic.

The distribution of wealth within the football pyramid has also been a major concern for the football fans. There was unrest within the Premier league when ‘project big picture’ was floated with matches started being played behind closed doors. The plan was touted as a solution to give financial aid to lower league clubs in exchange of benefits to the Premier League clubs, especially ‘the big six’ – Liverpool, Manchester United, Manchester City, Arsenal, Tottenham and Chelsea.

What has been done so far?

There have been several attempts to look into issues in English football. As early as in 1968, the Chester Committee report was commissioned “[t]o enquire into the state of Association Football at all levels, including the organisation, management, finance and administration, and the means by which the game may be developed for the public good; and to make recommendations.” The report most importantly pointed to infrastructural deficiencies at the backdrop of the 1946 Burnden Park disaster and pre-dating the infamous 1989 Hillsborough disaster.

The Andy Burnham-led 1997 Football Task Force looked at how the commercialisation of football clubs was ‘posing a risk of them losing touch with their home supporters’, while the 2005 Burns report looked at the structural and administrative issues in the English game.

U.K. Culture Secretary Oliver Dowden, on April 19, 2021, announced a ‘Fan-led review of football governance’ to “explore ways of improving the governance, ownership and financial sustainability of clubs in English football, building on the strengths of the football pyramid.”

Although the timeline of this Tracey Crouch-led independent review is unclear, a group of fans and ex-footballers with a ‘voice in the media’ have floated a petition demanding introduction of an Independent Football Regulator in England by the end of 2021. The petition, signed by Jamie Carragher, Rio Ferdinand, Gary Lineker and Gary Neville, currently has more than 140,572 signatures and has been chalked out to be debated in the U.K. Parliament on June 14, 2021.

The Greater Manchester Mayor, Andy Burnham, and Mayor of the Liverpool City Region Steve Rotheram have also pushed ‘#ReclaimOurGame’ campaign calling for, among other rules, a government legislation “to require all English clubs to secure a 51% majority of their registered season ticket holders on any major decision that fundamentally affects the club’s identity or future.” The fans have also been demanding a rule similar to the 50+1 rule in German football.

How will an Independent Regulator help?

Although the English Football Association (FA), in existence since 1863, is the official governing body of association football in the country, it has limited powers in influencing the commercially-dominant Premier League, as alluded to by the Greater Manchester Mayor in an Opinion piece in The Guardian. The league is run by the Football Association Premier League Ltd. which is owned by the 20 participating clubs with one vote each on legislative and structural changes. The FA’s role is limited to being a special shareholder with a veto over chairman and CEO elections and framing of new rules.

Since the league’s top earners – ‘the big six’ – draw in the largest chunk of broadcasting revenue for the competition, there has been a reluctance to curb decisions favoured by them. However, the failure of the ‘project big picture’ materialising highlights some structural protection that other clubs still have against exploitative practices in the game.

Governing bodies like FIFA, UEFA and IFAB (International Football Association Board) have also no direct power to regulate the commercial decisions of the leagues. Their actions can only be limited to bans from their respective competitions – as seen in the case of ESL, when threats were made to ban the participating clubs from Champions League and their players from the World Cup and the Euros.

The fans are demanding an Independent regulator that will oversee, among others, the: “approval of proposed take-overs of clubs considering proposed financing methods; application of a strengthened “fit and proper person” test for owners and directors; oversight of a club licensing scheme to ensure high standards of governance; and management of a system of redistribution of the game’s revenues to ensure the health of football at every level of the pyramid.”

The ‘50+1’ rule is a derivative of the clause in the regulations of the Deutsche Fußball-Liga (Bundesliga). As per the rule, the clubs must hold 50% plus one additional share for its members, usually the match-going fans, in order to obtain a license to play in the league. The clause significantly reduces the risk of a takeover by an external investor and ensures that the fans, holding the majority stakes, are more or less in control of the decision-making within the club.

In fact, the rule in Germany was brought in 1998 as a relaxation for clubs to seek potential external investors and convert their football teams into public or private limited companies. Prior to the introduction of the clause, German football clubs were publicly owned, not-for-profit enterprises.

The only exemption from this rule is when an external investor has substantially funded and contributed to the running of the club. Bayer 04 Leverkusen (owned by Bayer pharmaceuticals), VfL Wolfsburg (owned by Volkswagen) and 1899 Hoffenheim (owned by SAP co-founder Dietmar Hopp) are three examples of this exception.

By and large, the model has been successful in forging and sustaining a critical relationship between fans and their clubs.

A similar rule is observed for all sports with league systems in Sweden. The Swedish Sports Confederation has mandated that only not-for-profit clubs can play in their league systems and that if a company does invest in the clubs, it is the prerogative of the latter to hold a majority share.