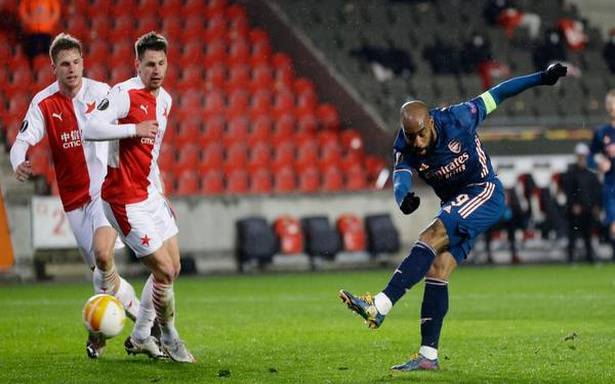 Arsenal cruises through to a semifinal showdown with Villarreal

Roma’s Edin Dzeko scored the equaliser in a 1-1 draw against Ajax to advance to the Europa League semifinals 3-2 on aggregate in Rome on Thursday. Roma will meet Manchester United, which beat Granada 2-0.

Roma had won the first leg 2-1 in Amsterdam, but the Dutch took the lead after the break with a Brian Brobbey goal.

Dzeko tapped in with 18 minutes to go as the host held on to reach the final four of a European competition for the second time in four seasons after the Champions League in 2018.

United had few problems against Granada, which had a mountain to climb after losing the first leg 2-0 in Spain.

Edinson Cavani opened the scoring after just five minutes to put United ahead and Jesus Valleho’s last-minute own goal sealed the win for United, which could yet have an all-English final with Arsenal.

The Gunners will face Villarreal in a fortnight after cruising past Slavia Prague 4-0 to go through 5-1 on aggregate.

Behind on away goals, Arsenal ended Slavia’s 23-match unbeaten run thanks to a six-minute blitz in the first half that sealed the tie.

Nicolas Pepe put Arsenal ahead in the 18th minute before Alexandre Lacazette made no mistake from the spot three minutes later. With 24 minutes on the clock, Bukayo Saka made it three with a driving run and drilled near post finish.

Lacazette scored his second in the 77th minute drilling home a left-foot finish that put the cherry on the cake for Mikel Arteta’s side.

Unai Emery is on course to claim his fourth Europa League crown as a coach after Villarreal team made short work of Dinamo Zagreb in a 2-1 win to qualify 3-1 on aggregate.

Paco Alacer opened the scoring nine minutes before the break before Gerard Moreno fired home his sixth goal in the competition in the 43rd minute. Mislav Orsic salvaged some pride for Dinamo with 16 minutes left.