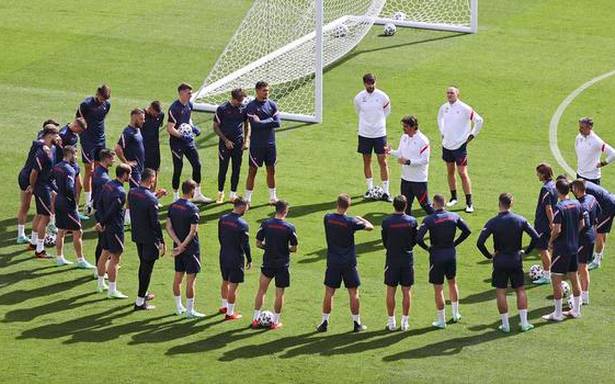 Dani Osmo will be lining up against some familiar opponents when Spain faces Croatia in the round of 16 at the European Championship.

In fact, he easily could have been lining up for Croatia instead of Spain at Euro 2020.

The attacking midfielder turned down overtures from Croatia’s national team after moving to Dinamo Zagreb from Barcelona’s academy as a 16-year-old and spending six seasons at the club.

Olmo has never played senior club soccer in Spain — he moved to RB Leipzig in 2020 — but doesn’t regret his decision to stick to his home country.

“There was interest from Croatia, but I always preferred to play for Spain,” Olmo said.

The 23-year-old Olmo is part of a group of young players who have been given leading roles in Luis Enrique’s new-look Spain team. Against Croatia, he has the added role of being the in-house expert on the opposing players.

“Our coach knows the Croatia team well. If he asks me, I will share my opinion with him,” Olmo said. ”I have played with the majority of their players. … I think (Bruno) Petkovic stands out. He is a complete player and we have to pay extra attention to him.” However, Croatia will be without one of its best players for the game in Copenhagen after forward Ivan Perisic tested positive for COVID-19. Perisic, who scored two goals during the group stage, will have to self-isolate for 10 days and would also miss the quarterfinals and semifinals if Croatia advances that far.

Spain and Croatia both seem to be peaking at the right time after slow starts to the tournament. Spain beat Slovakia 5-0 in its final group game to advance, while Croatia defeated Scotland 3-1 to finish second behind England in Group D. Both also have strong tournament pedigree, although their recent trajectories have gone in opposite directions. Croatia reached the 2018 World Cup final before losing to France, and 13 of those players are still in the squad.

Spain won three straight major tournaments between 2008-2012, including two European Championships, but lost in the round of 16 at both Euro 2016 and the 2018 World Cup in Russia. What’s more, only seven players in the Spain squad had played at a previous major tournament.

One of those veterans, Barcelona midfielder Sergio Busquets, gave the team a massive lift when he returned for the Slovakia game after testing positive for coronavirus before the tournament.

Croatia, though, will play a more aggressive style and won’t sit back to let Spain dominate possession.

“When the Spaniards have possession they force it, they had a little difficulty in the first two games with scoring,” Croatia defender Duje Caleta-Car said.

“We have players who can show their quality through possession as well, and that’s where I see our chance. They haven’t experienced that yet, that someone takes the ball from them.” Croatia midfielder Nikola Vlasic also warned against giving Spain too much time on the ball.

“We certainly must prevent them from feeling comfortable and playing their football,” Vlasic said. “That would be deadly for us, because they’re really excellent technically.” Croatia veteran Luka Modric showed with his goal against Scotland that he remains a formidable force at 35 and will be the player trying to dictate the game.

“He is their engine and the heart of the Croatian national team,” Olmo said of Modric. “Croatia’s attack flows from his boots.” When it comes to Spain’s attack, much of the focus will again be on Alvaro Morata. The Spain striker received a torrent of online abuse after missing a penalty against Slovakia and was also heavily criticized after the first two games, despite scoring against Poland.

Morata said he received threats against his children and couldn’t sleep for nine hours after the Slovakia game. But with Spain having recovered its scoring touch against Slovakia, the team may not have to rely so much on Morata.

Spain has missed its last five penalties overall — including two at Euro 2020 — so the coach probably isn’t relishing the prospect of a shootout.