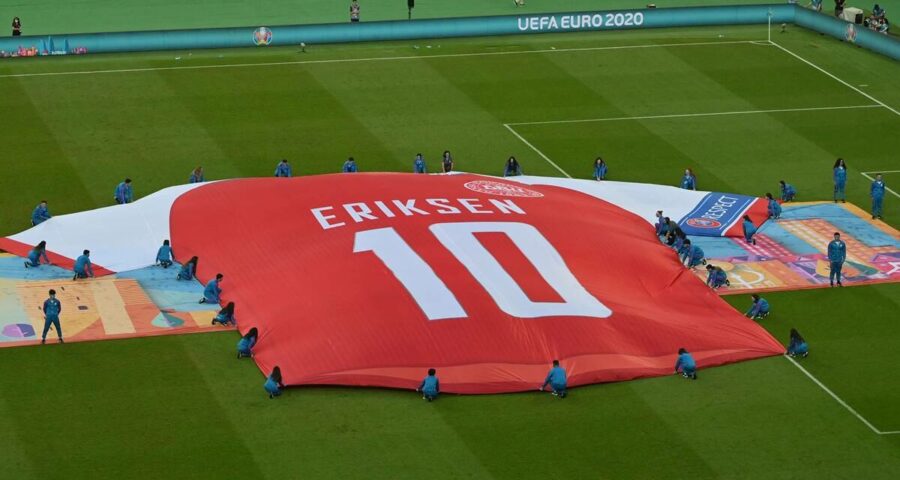 Gareth Southgate says Euro 2020 semi-final opponents Denmark are "riding a wave of emotion" driven by their experience with Christian Eriksen and will be a "powerful force" at Wembley. England manager Gareth Southgate says Euro 2020 semi-final opponents Denmark are “riding a wave of emotion” driven by their experience with Christian Eriksen and will be a “powerful force” at Wembley on Wednesday.

Eriksen collapsed after a cardiac arrest just before halftime in the Danes’ opening match of the tournament against Finland and was taken to hospital after receiving CPR on the pitch.

The Danes lost that game but without their playmaker came through the group stage and beat Wales and the Czech Republic to set up the clash with unbeaten England.

“We talk about perspective in sport but we rarely have it. This was a moment that brought it home for all of us,” Southgate said.

“I can also imagine what it has done for the Danish team, their bond. We are talking about the things we have been through but what they went through that day – the way their captain (Simon Kjaer) was and the way the group was – and how that would have connected with their supporters, that’s pretty powerful.

“They are riding a wave of emotion for certain and that’s a powerful force that’s coming to Wembley. Those things definitely have an impact on your thinking,” he added.

England have not reached the final of a major tournament since 1966 but having dealt with Germany and enjoyed a 4-0 win over Ukraine, they appear to have put aside their traditional jitters in the knockout stages.

“We’ve knocked off so many hoodoos or perceived barriers already and I feel like this group of players will feel this is just the next challenge,” he said.

Under Southgate, England reached the last four in the World Cup in Russia in 2018 before losing to Croatia and the manager said such an outcome would not be viewed as an achievement this time.

“We won’t feel totally satisfied if it’s just a semi-final for us whereas maybe three years ago, although there was massive disappointment after the semi-final (at the World Cup), there was a feeling we’d come a long way,” he said.

“Now we’ve replicated what we did there, but that won’t be enough to fulfil the group. That’s a positive sign.”