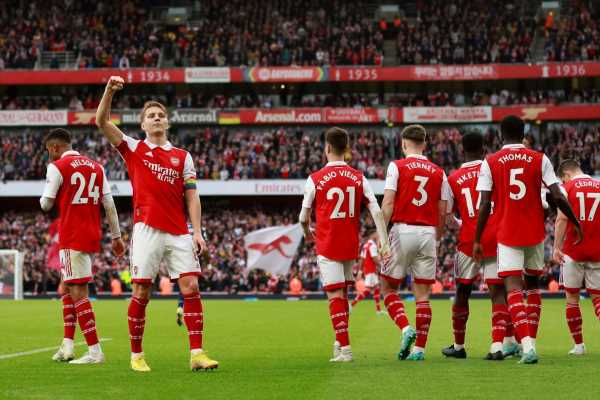 A round-up of Sunday’s action in the Premier League.

Arsenal thrashed Nottingham Forest 5-0 at the Emirates on Sunday to return to the top of the Premier League, but the win may have come at a cost after Bukayo Saka limped off midway through the first half.

Saka’s replacement Reiss Nelson scored a brace to go with goals from Gabriel Martinelli, Thomas Partey and Martin Odegaard. But the injury to the winger will be a major concern for manager Mikel Arteta and his England counterpart Gareth Southgate, three weeks ahead of the start of the World Cup in Qatar.

Arsenal move to 31 points from their 12 games, two ahead of Manchester City, while an outclassed Forest remains rooted to the bottom of the table with nine points, having played a game more.

Saka was excellent in the opening minutes and it was his cross that was headed into the net by Martinelli for the opener, but he went down injured shortly afterwards after a challenge from Forest’s Renan Lodi. Saka tried to continue but came off after 27 minutes.

Arsenal should have been further ahead at halftime but made sure of the points within the first 15 minutes of the second period as Nelson scored twice in quick succession before Partey netted a stunning fourth with a curling shot from outside the box.

Odegaard later blasted into the top corner from close range for the fifth.

Arsenal’s next Premier League fixture is a trip across London to Chelsea next Sunday, while Forest host Brentford the day before.