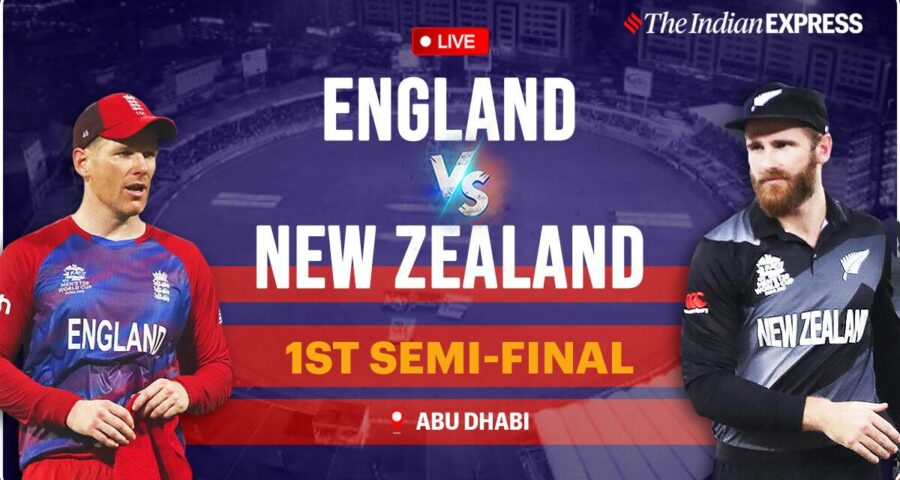 England vs New Zealand, T20 World Cup 1st Semi-Final Live Cricket Score: Title favourites but injury-hit England look to upstage a consistent New Zealand in the first semifinal of the T20 World Cup on Wednesday. England were the pre-tournament favourites and played like one for the majority of the Super 12 stage. Meanwhile, New Zealand have been arguably the best bowling unit in the tournament, restricting the likes of India to 110. New Zealand’s batters have also made impact during the course of the tournament.

A moment of silence for the passing of Mohan Singh (this stadium’s chief curator), before the national anthems begin. He passed away on the eve of the game between Afghanistan and New Zealand.

“We would have looked to bowl first too, but hopefully the toss doesn’t decide the result of the game. Roy misses out today, obviously he’s disappointed because he’s played a big role for us in this tournament, and to miss out on a semi-final is devastating. However, Billings gets another chance. He’s been doing the hardwork and carrying the drinks for us, and it’s a big opportunity for him. Bairstow will open today, instead of Roy, since he’s done it really well in the past. We can’t take New Zealand lightly at all, they’ve been playing semi-finals and finals for a lot longer than we have, so we’ll have to play out of our skins to beat them. Looking forward to a great contest today.”

“We’re bowling first. It’s a good pitch but a bit of dew later. We’re going in with the same team. Busy period for us, and we’ve come through, giving in good performances. The two most experienced bowlers have bowled beautifully throughout the tournament, and after Lockie, Milne has come in and done well too. England has a lot of depth, that’s their strength, and we have the opportunity to play our own brand of cricket to make it to the final.”

New Zealand have won the toss and elected to field. England have batted first eight times in T20Is v New Zealand. They have won six of those matches, losing just one, with one no result. Who are you backing in this one?

It was in the 2016 edition where New Zealand were asked to bat first and they scored 153/8 in 20 overs. However, England chased it down in 17.1 overs, winning the contest by seven wickets.

These two sides have faced each other in 21 T20Is, with the world champions leading 21-7 with one match ending in a tie. In the last five matches between the two teams, England have won three.

The absence of Jason Roy, who suffered a calf injury against the Proteas, is a big blow to the team heading into the semifinals. Roy and Jos Buttler made arguably the most destructive opening pairing of the tournament.

Title favourites but injury-hit England will bank on their X-Factor players to upstage a remarkably consistent New Zealand in the first semifinal of the T20 World Cup on Wednesday. England were the pre-tournament favourites and played like one for the majority of the Super 12 stage. However, their loss in the final group game to South Africa showed that they were not an invincible outfit. Stay tuned for live updates. ENG vs NZ T20 World Cup semifinal: Both New Zealand and England have key players who are IPL regulars; from Kane Williamson and Trent Boult to Eoin Morgan and Moeen Ali.

A little over two years after contesting arguably the greatest One-Day International of all time, on the grandest stage in the game, familiar rivals England and New Zealand lock horns to earn the right to contest the final of the ICC T20 World Cup. The 2019 50-over World Cup final at Lord’s was one for the ages, and another nail-biter may be in store when the two sides face off in Abu Dhabi on Wednesday. (READ MORE)