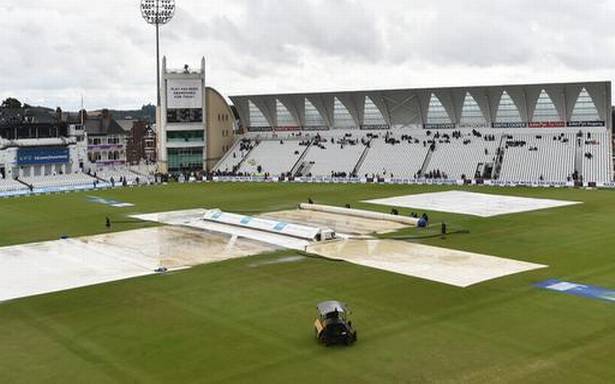 The second Test in this five-match series is scheduled to start at Lord’s on Thursday.

Rain ensured the first Test between England and India at Trent Bridge ended in a draw after no play was possible on Sunday’s last day.

The match was intriguingly poised with India 52-1 in their second innings, needing a further 157 runs to reach a victory target of 209 in what promised to be tough batting conditions.

But persistent early morning rain prevented play resuming as scheduled at 11:00 am local time (1000 GMT), with the pitch and square both remaining fully covered.

Further downpours dashed hopes of a grandstand finish, with the umpires abandoning play at 3:49 pm (1449 GMT) to leave this five-match series locked at 0-0 ahead of the second Test at Lord’s starting on Thursday.

That India faced a tricky chase was largely down to England captain Joe Root making 109 in his side’s second innings of 303 after he had top-scored with 64 in a first-innings 183.

Root made his 21st Test century after coming into bat at 46-2 — the 14th time in 18 Test innings this year that England had failed to reach 50 before losing their second wicket.

England were unable to call on Ben Stokes to bail out their top order, with the star all-rounder set to miss the whole of this series after announcing last week he was taking an indefinite break from all cricket because of mental health issues.

Their batting woes were exemplified by Zak Crawley, who having made just 33 runs in this match is averaging 11.14 in 14 Test innings since his superb 267 against Pakistan at Southampton last year.

England seamer Ollie Robinson, playing just his second match at this level, took a Test-best 5-85 after the re-emergence of historic racist and sexist tweets during his debut against New Zealand at Lord’s in June saw him serve a three-game ban.

Meanwhile, James Anderson’s 4-54 took the England great, already the most successful fast bowler in Test history, into third in the all-time list of wicket-takers at this level. His tally of 621 is bettered only by retired spinners in Sri Lanka’s Muttiah Muralitharan (800 wickets) and Australia’s Shane Warne (708).

This match was just the second time India’s quick bowlers have taken all 20 opposition wickets in a Test.

The only other occasion was at Johannesburg in 2018 when Bumrah, Bhuvneshwar Kumar, Ishant Sharma and Mohammed Shami shared the wickets.

India, who beat Root’s men 3-1 at home earlier this year, are bidding for only their fourth Test series win on English soil following 1971, 1986 and 2007 triumphs.

This match also marked the start of the new World Test Championship cycle, with India having lost to New Zealand in the inaugural final at Southampton in June.