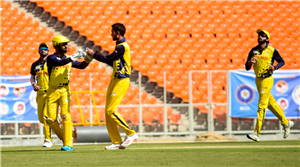 Tamil Nadu went on a stellar march this season, as they won seven matches on the bounce, all through efficiently orchestrated run-chases. 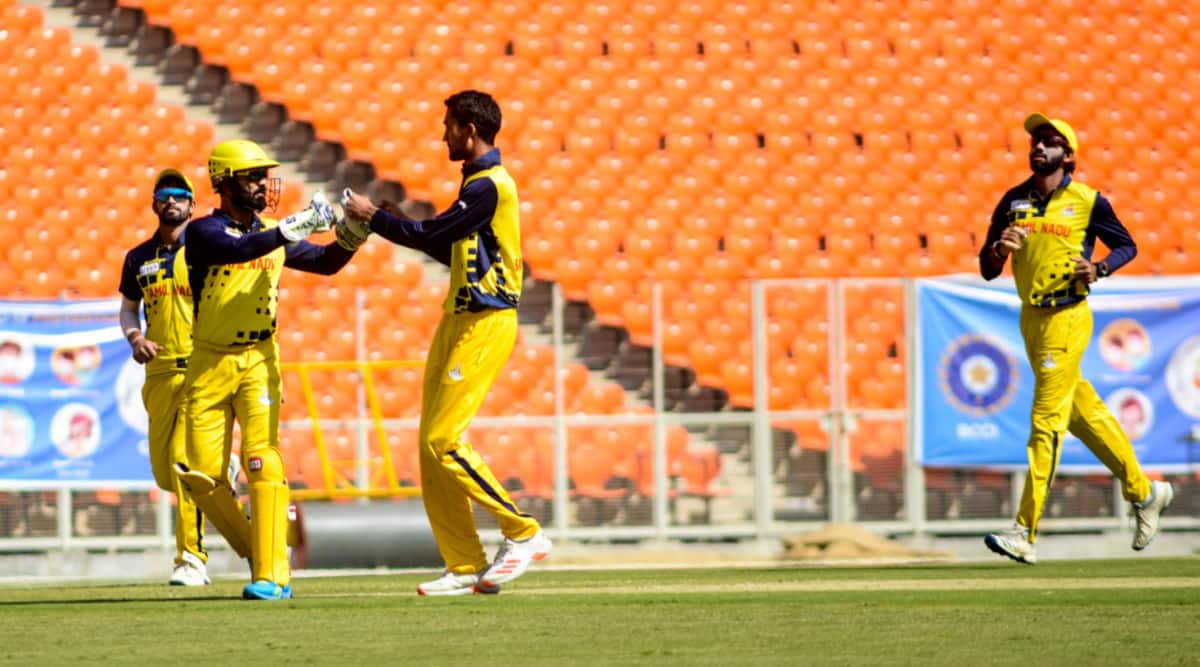 Moments after Shahrukh Khan drilled Lukman Meriwala through extra-cover for a boundary to seal victory, the cameras focused on Dinesh Karthik. He was Tamil Nadu’s 22-year-old captain who led them to the title in the inaugural edition of the Syed Mushtaq Ali Trophy in 2006-07. More than 14 years later, Karthik continues to be the undisputed leader of this team, as they secured their second domestic T20 crown on Sunday. It’s been a stellar march this season, as they won seven matches on the bounce, all through efficiently orchestrated run-chases.

Sunday’s 121-run chase against a competent Baroda attack at Motera was not supposed to be a cakewalk. The pitch had sharp turn on offer, which was evident when the Tamil Nadu spinners operated in the first innings. However, the evening dew compromised the effectiveness of Baroda’s bowlers. Consequently, batting second became much easier, as Tamil Nadu coasted to a seven-wicket win, reaching the target with two overs to spare. This win, in many ways, also made up for last year’s agonising 1-run loss to Karnataka in the title clash.

“It really hurt us last year. We lost by a whisker. This year, we had our sights on the knockouts and then we got consistent. It’s the sign of a good team. I think just the fact that there are players like (T) Natarajan and (Washington) Sundar in the Indian team, who were in this team last year, is the sign of a team doing well. I’m sure there are a few who’ll go on from this team as well,” a euphoric Karthik said at the post-match presentation ceremony.

Irrespective of the match situation, the Baroda dug-out breathes easy whenever Vishnu Solanki is at the crease. These days, the 28-year-old has become his team’s crisis manager. So, whether the side needs 15 runs off the final 3 balls of the match, or is in trouble at 36/6 on a slow, gripping surface, Solanki is invariably the man to bail Baroda out of trouble.

Even as the Baroda top order was tormented by the precision and guile of the four Tamil Nadu spinners, it was the 58-run seventh-wicket stand between Solanki and Atit Sheth that navigated the team to a position of some respectability. Such was the sway that the spinners had that at one stage, even a three-figure score didn’t look likely.

With scoring against spinners proving to be a treacherous proposition, Solanki targeted the two medium-pacers —- Sonu Yadav and M. Mohammed. His batsmanship is based on hanging deep in the crease and using his supple wrists to great effect. In the partnership with the resourceful Sheth, they dug deep, rotated strike admirably, before teeing off in the final three overs to finish at 120/9. Yet again, Solanki’s 55-ball 49 proved to be the cornerstone of Baroda’s innings. Without him, they wouldn’t have had any total to defend.

For Tamil Nadu, left-arm spinner M. Siddharth, playing his first match of the tournament, proved to be a trump card. Karthik’s plan to unleash him inside the Powerplay was a masterstroke. When Sidharth tossed it up, he extracted prodigious turn and bounce. His arm ball was rewarded with the wicket of Smit Patel. Finishing with figures of 4/20 on Sunday, Sidharth, who has been released by Kolkata Knight Riders, is sure to attract attention at this year’s IPL auction.

Looking ahead… to the IPL auction

During the lockdown, Kakade worked on his power-hitting and developed an arm ball and a carrom ball, adding layers of intrigue as an off-spinner. The hard work has paid dividends for the 25-year-old, who impressed in this edition of the Syed Mushtaq Ali Trophy. His crafty bowling bewitched opposition batsmen (he picked five wickets at a decent economy rate of 6.7), and he was electrifying in the field. With bat in hand, Kakade walloped a match-winning 41-ball 53 against Punjab in the semifinal. Blessed with these all-round abilities, his coaches describe him as a player with the ‘X-factor’.

Solanki is one of the heart-warming stories of domestic cricket. He grew up in Undera, just a stone’s throw away from the IPCL Stadium in Baroda. Fans will remember two of his knocks in this edition of the Syed Mushtaq Ali Trophy. First, an unbeaten 46-ball 71 – against Haryana in the quarterfinal, when he hit a six, four and six off the last three balls to seal an improbable victory, the last of the three strokes being a helicopter shot. The second knock showcased his composure in the final against Tamil Nadu, where he guided his team to a semblance of respectability from 36/6.

The 26-year-old hails from Thalangara, a rare Kerala town where children prefer to hit a ball with a bat and not kick it. In Kerala’s league encounter against Mumbai at the Wankhede Stadium, he smashed a 37-ball ton en route to a 54-ball 137. The blistering knock consisted of nine fours and 11 sixes, and was the third-fastest T20 century by an Indian after Rishabh Pant (32 balls) and Rohit Sharma (35 balls). The century not only sent social media into a meltdown, but also piqued considerable interest amongst talent scouts and franchises ahead of the IPL auction.

Manimaran Siddharth, a skilful left-arm spinner, made his domestic T20 debut for Tamil Nadu in 2019. After a splendid outing for his state team (he picked 12 wickets from five games), he was snapped up by Kolkata Knight Riders for a base price of Rs 20 lakh. But he didn’t play a single game for the franchise and was released after the 2020 season. But after a match-winning haul of 4/20 in the Syed Mushtaq Ali Trophy final against Baroda, the 22-year-old is sure to attract franchises’ attention.