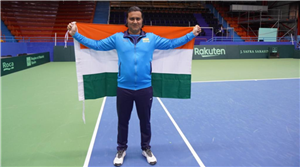 For 48 hours, India's Davis Cup captain Rohit Rajpal and his family had struggled, literally begged for a bed with oxygen but all their pleas were refused politely. Sucking air with enormous difficulty on the evening of May 2, India’s Davis Cup captain Rohit Rajpal asked his brother to immediately assemble the whole family outside his room so that he could see his loved ones for one last time.

Rajpal’s younger brother Rahul, pleaded him, “don’t give up”.

For 48 hours, he and his family had struggled, literally begged for a bed with oxygen but all their pleas were refused politely.

Ever since his domestic help Birju died of the dreaded COVID-19 on April 28, Rajpal knew that he and his family were at risk since the deceased was in contact with them.

On April 25, the 50-year-old got confirmation that he too has contracted the disease. He first got fever which was manageable but little did he know that in few days, he would be ‘face to face’ with death.

Calls to influential people, including at least five chairmen and owners of big hospitals in Delhi and Gurugram, did not result in any relief. No bed with oxygen was available since hospitals were full with similar patients.

Desperate attempts to get the anti-viral injection Remdesivir also fell flat and if at all someone was willing to give, the quote given to the family for one injection was Rs 60,000 as against the original Rs 3000.

Slapped with cruel reality of the times, the man, who is a BJP state executive, President of DLTA, treasurer of AITA and has financial assets worth a few hundred crores, realised that life actually hangs on a slender thread.

No connection, power or money could lend him a few breaths.

Then a miraculous call came from his state BJP colleague Satish Upadhyay.

“The phone was on speaker mode. I was listening when Satish bhai was shouting that I must reach National Heart Institute in East of Kailash, finally a bed was arranged. But I realised that I could not walk, there was no air in my lungs and no energy in body to walk out of my room,” Rajpal recounts.

A fleet of luxury cars in his sprawling three-acre farm house was of no use. He needed a vehicle fitted with oxygen cylinder.

“Reaching hospital was tough without oxygen. My brother finally managed a small ambulance in which we placed a dirty, rusty cylinder which could infuse a few more breaths in my feeble body.”

By that time, Rajpal’s ex brother-in-law and Bollywood actor Fardeen Khan, who was in Mumbai, had arranged a vial of Remdesivir. But Rajpal did not carry them to hospital, fearing that his father, Ramesh would also need the crucial medicine.

“I was more worried about my father. But my friend Dr Shamsher Dwivedi (VIMHANS Chairman) warned me that If I won’t take those injections, I won’t survive more than a few hours since it was a very aggressive strain. He promised that he will arrange something for my dad also but I must take those injection right away,” he said.

Rajpal says the days he spent in the hospital was a humbling experience.

“So many people died. There was not enough oxygen for all. It was hell. I think my father and I must have done some good deeds that we both survived,” he said.

“Hats off to doctors, nurses and attendants. They risked their lives to save us. They kept assuring me that we will be alright, kept me motivated.”

Rajpal said those 11 days in the hospital taught him that the privileged people like him take ‘simple pleasure of life’ for granted.

In his obsession to manage and expand the garments business empire created by his father, Rajpal said he had forgotton simple lessons of life.

“My life moved before my eyes, scene by scene like a movie. You won’t believe after years I ate food with ‘sukoon’ (peace). I had even forgotton how a meal tastes. I savoured a humble dal-roti like the tastiest food on planet.

“For once I was not thinking about back-to-back meetings. We take simple pleasures for granted.

“I am by God’s grace a privileged one. I was in habit of helping others all my life but I could not help Birju (his domestic help). He died.”

He says it was one of the major setbacks in his life.

“I could not arrange a bed for him. I don’t know how I will face his wife and kids. Never ever in my life I felt so helpless,” his voice had dejection.

“My sincerest condolences to all who have lost their loved ones. If this happens to me, I can’t imagine what a common man would have been facing.”

Now that he has got a second life, Rajpal said he will make sure that he makes it meaningful.

“We are running after unnecessary and irrelevant things in life and often forget the big picture in life that it’s very short and must be lived to fullest with people you care about,” he concluded on a philosophical note.