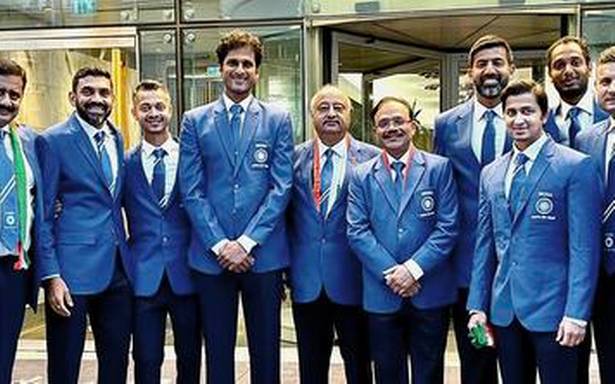 The players assemble in Helsinki from different places

The Indian Davis Cup team, spearheaded by Prajnesh Gunneswaran and Ramkumar Ramanathan, has assembled in strength in Helsinki for the Davis Cup World Group first round tie against Finland.

The players arrived from different places, and Ramkumar was the last to reach after he had won the Challenger doubles title in France on Saturday.

Asian Games gold medallists Rohan Bopanna and Divij Sharan will play the doubles rubber in the tie scheduled for September 17 and 18.

Saketh Myneni stepped in to support the team after Sumit Nagal had opted out of the tie.

The team has been training at the Smash Tennis Centre ever since the players reached Helsinki. The venue for the tie, Espoo Metro Areena, is a ice-hockey stadium, which will have a temporary tennis court, which is expected to be ready for practice from Tuesday.

The team is also scheduled to get into a bubble on Tuesday, after which it will be restricted movement from hotel to venue for the whole team, which has Rohit Rajpal as the captain and Zeeshan Ali as the coach.

AITA president Anil Jain and secretary-general Anil Dhupar have strengthened the team with their presence. Gaurang Shukla and Yash Pandey are the physios.

The Indian Ambassador Raveesh Kumar hosted a dinner for the Indian team on Sunday, with the number restricted to 25 as per the rules. With the emphasis on vaccination, people are not required to sport masks.

With the whole Indian team vaccinated, the members have been exempted from going through any COVID-19 test. They will only have the temperature check on a daily basis.

Despite rains and a cold weather over the weekend, the team has been training indoors without any hitch.