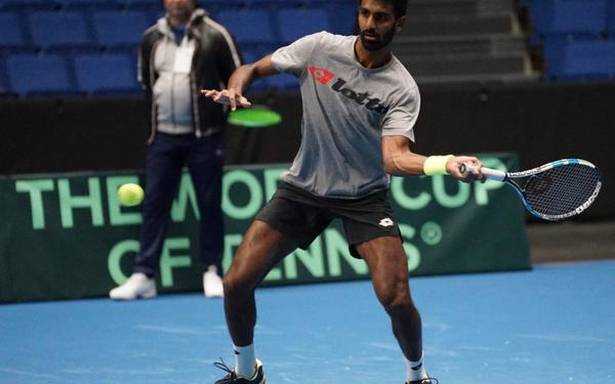 Doubles could decide the tie depending on the first day’s results, feels coach Zeeshan

Finland’s hopes rest squarely on the shoulders of 74th-ranked Emil Ruusuvuori for the Davis Cup World Group first round tie against India, to be played on indoor hard courts at the Espoo Metro Areena, on Sept. 17 and 18.

Even though India will be missing Sumit Nagal, busy playing a Challenger this week in Poland, coach Zeeshan Ali felt the teams were evenly balanced as the rest of the Finnish singles player do not have a rank in the top-400.

“We are missing Sumit as he would have given us more options if we wanted to switch players around. Our second singles player is ranked higher. So, it is pretty even. Doubles will be a very important match and could decide this tie, depending on the first day’s results,” said Zeeshan.

After training at the Smash tennis centre in Helsinki, the Indian team practised at the Espoo Arena on Tuesday.

“It is 50-50 as of now. We will have clarity on strategy once we see the players train over the next few sessions,” said captain Rohit Rajpal.

“We are doing three sessions of two hours each today. I want to push the players hard on Wednesday also, easing up on Thursday, a day before the tie,” said Zeeshan, quite keen to gauge the speed of the match court.

While Prajnesh Gunneswaran (165) and Ramkumar Ramanathan (187) have been busy on the tour, Saketh Myneni has been training in Hyderabad, trying to get back into the circuit.

“Prajnesh, Ramkumar and Saketh are all timing the ball well. At this point, all three singles players are ready to play. A lot depends on the speed of the court. I am glad Saketh is here as he has a big game and the experience of playing for India in the past.

“Ramkumar is coming off a good tournament in France, where he reached the singles quarterfinals and won the doubles title. He is obviously playing sharp,” observed the coach.

Asian Games champions Rohan Bopanna and Divij Sharan give India the edge in doubles as they have played a fair share of matches together. “Our team is in good shape and the players are sharp,” said the skipper.