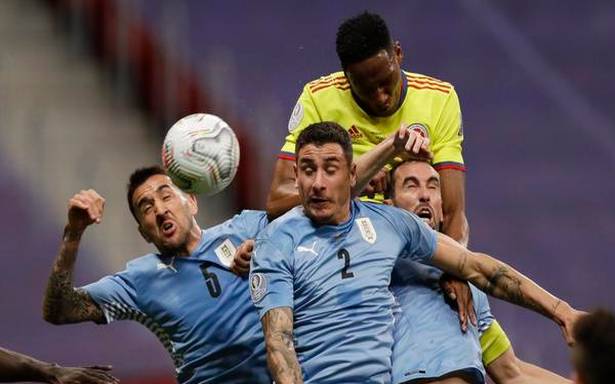 The final is scheduled for the Maracana stadium in Rio de Janeiro on July 10.

Goalkeeper David Ospina celebrated becoming Colombia’s most capped player on Saturday by saving two penalties in a shoot out to give his country victory over Uruguay and a place in the Copa America semi-finals.

Ospina made a record 112th appearance in Saturday’s tie in Brasilia and was the hero after he saved spot kicks from Jose Maria Gimenez and Matias Vina.

Colombia converted their first four to progress 4-2 on penalties following a nervy encounter in Brasilia that finished 0-0 after 90 minutes.

“We knew David would be decisive and that we had to score to stay in the tournament,” said Colombian coach Reinaldo Rueda. “David has always been a leader. He’s very cerebral when it comes to penalties. That’s a big help to our team.”

Uruguay began this tournament in the middle of a goal drought and although they scored twice against Bolivia and once against Paraguay in their last two group games they still looked uncomfortable up front, with service to Luis Suarez and Edinson Cavani sparse and neither striker firing on all cylinders.

Colombia, too, looked like they missed suspended midfield general Juan Cuadrado and neither side showed much composure in a game that was characterised by stray passes and painfully slow transitions from the back.

Both sides could only muster one shot on target between them in the first half but things changed after the break as both teams started to lose their inhibitions and come forward.

However, neither could find the breakthrough and after ending nil-nil the match went straight to penalties.

“I didn’t think Colombia were much better than us,” said Uruguayan coach Oscar Tabarez said. “We each had our moments.”

“Maybe we lacked a bit more forcefulness when we had the ball. But in terms of commitment, there’s nothing I can criticise, I can only lament that we’re not going further,” he said.

Uruguay’s defeat was reminiscent of the last Copa America, when they were also eliminated at the quarter-final stage on penalties, by Peru.

This time their problem was scoring goals — they managed just four in five matches — something that Tabarez acknowledged he had to fix.

“You get points for scoring goals and not conceding them,” he said. “It’s something we have to improve.”

Colombia, who have won this title only once back in 2001, will take on the winner of Saturday’s later quarter-final between Argentina and Ecuador.

Host Brazil face Peru in the other semi-final.

The final is scheduled for the Maracana stadium in Rio de Janeiro on July 10.