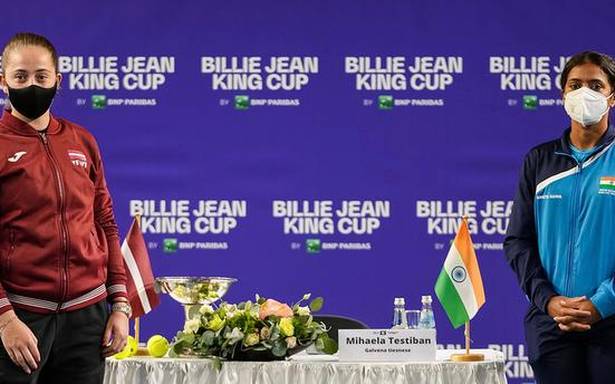 The lack of crowd and a hard court may tilt the balance slightly away from host Latvia, but leading players Jelena Ostapenko and Anastasija Sevastova are confident of playing their best against India in the Billie Jean King Cup (erstwhile Fed Cup) World group play-off tennis tie.

“It is not fun for me to play without a crowd. (But) We are ready to go,” said Grand Slam champion Ostapenko at the draw ceremony in Jurmala on Thursday. She will take on Ankita Raina in the first match on Friday, followed by Karman Kaur Thandi against Sevastova.

“It is tough without spectators at home. We are glad to play. We have to be at our best,” said the 47th-ranked Sevastova. Conceding that the hard court instead of clay was “good for team India”, the 31-year-old Sevastova said that she had played on the courts from the age of 10 and would still feel at home.

“We are ready to put up a tough fight,” said India captain Vishaal Uppal. Playing for the first time at this level, Uppal felt that the “home crowd pressure” will not be there on the Indians.

“Glad to have this opportunity. I always play the best when playing for the country. I am excited for the tie,” said Ankita, happy to take the load of playing three of the five rubbers in the tie.

“Fast or slow hard court does not matter. It is an opportunity to play against good players. I am looking forward to it,” said Karman.

“On day one, I thought Karman could give us a little extra. It was a tough decision. I have gone with my gut,” said Uppal about opting for Karman ahead of Rutuja Bhosale.

Karman summed it up nicely about Fed Cup being rechristened. “It is an honour for us to represent this brand. Billie Jean King stood up for equality and social justice.”