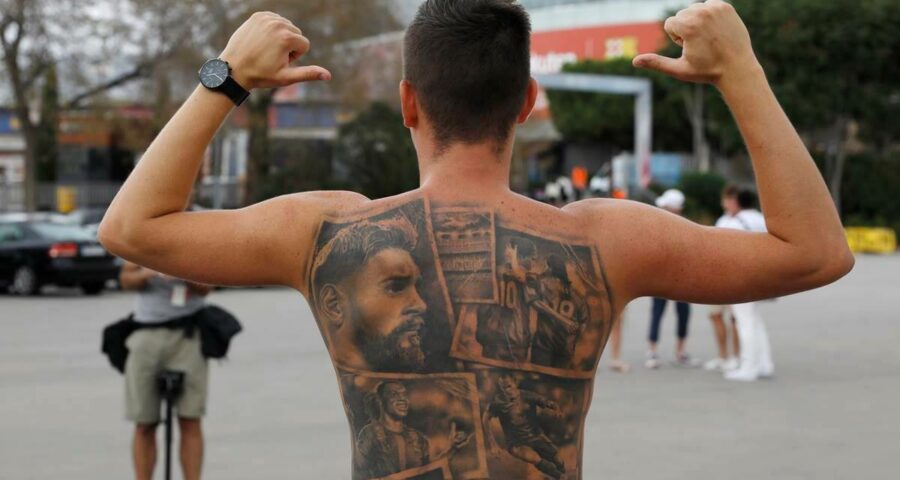 While PSG fans chanted Messi's name upon his ceremonial introduction, the Barcelona faithful are still adjusting to the reality that he's gone. Marc van Cromvoirt had been thrilled to get a ticket to Barcelona’s season opener to finally watch his favorite player, Lionel Messi, up close for the first time.

“I haven’t seen him in person,” he said outside Camp Nou, “and still won’t unfortunately.”

While Paris Saint-German fans chanted Messi’s name upon his ceremonial introduction at Parc des Princes, the Barcelona faithful are still adjusting to the reality that he’s gone.

Van Cromvoirt, a Dutchman in his mid-20s living and working in Barcelona temporarily, already had his ticket before the team announced that it couldn’t afford to keep its greatest player. He did the stadium tour on Saturday.

“I’m still excited about seeing the game of course,” he said.

Inside the club’s “megastore” at Camp Nou, Messi’s No. 10 shirts are still available but they’re on a floor rack while the jerseys of current players like Antoine Griezmann, Frenkie de Jong and Ansu Fati hang prominently on wall racks. No, Messi’s not on discount. Men’s blue-and-scarlet home jerseys for 2021-22 were all priced at 110 euros ($130).

For Meritxell Reyes, she can at least say that she’s seen Messi play — even it it’s hard to remember. She was just a toddler when her father brought her to a game. Now 12, she was sporting a Messi jersey as was her little sister after a trip to the Camp Nou store alongside her parents on Saturday.

“He’s the best in the world. It’s sad,” she said. “I hope he comes back to Barcelona but I don’t think so.”

“It’s impossible to replace him but it’s also difficult for other players to shine when you have a teammate like Messi,” he said “Let’s hope the team picks it up.”

Barcelona coach Ronald Koeman would agree with the sentiment. At his pre-match news conference on Saturday, he acknowledged the fans’ pain but urged them not to “live in the past.”

Messi won every major honor with Barcelona and held an emotional farewell news conference one week ago to signal the end of an era. He had planned to reduce his salary by 50%, but the club’s debt — more than 1.2 billion euros ($1.4 billion) — and the Spanish league’s financial fair-play regulations made it unworkable.

PSG quickly swooped in and signed Messi to a two-year contract with an option for a third season.

Koeman said he’s counting on Griezmann in particular “because Antoine will play in Messi’s position, giving more freedom to the squad, and this can be an advantage for him. … He’s one of the players who has to take a step forward now.”

The state of Barcelona’s financial situation was evident again when the club had to scramble to register new signings Memphis Depay and Eric Garcia to play in the Spanish league at the last minute. It was made possible by center-back Gerard Piqué agreeing to a “substantially reduced” salary, the team said Saturday.

Spanish health authorities are allowing crowds of up to 40% of the venues’ capacity, but with many Catalans on vacation in August the 99,000-seat Camp Nou was expected to hold fewer than 30,000 fans.

Van Cromvoirt has a plan B for seeing Messi in person. He’s talked to his friends about it.

“Paris is quite close to the Netherlands, it’s like a five-hour drive. We said, ‘let’s go see PSG this season,’ especially if (Kylian) Mbappe stays as well.”