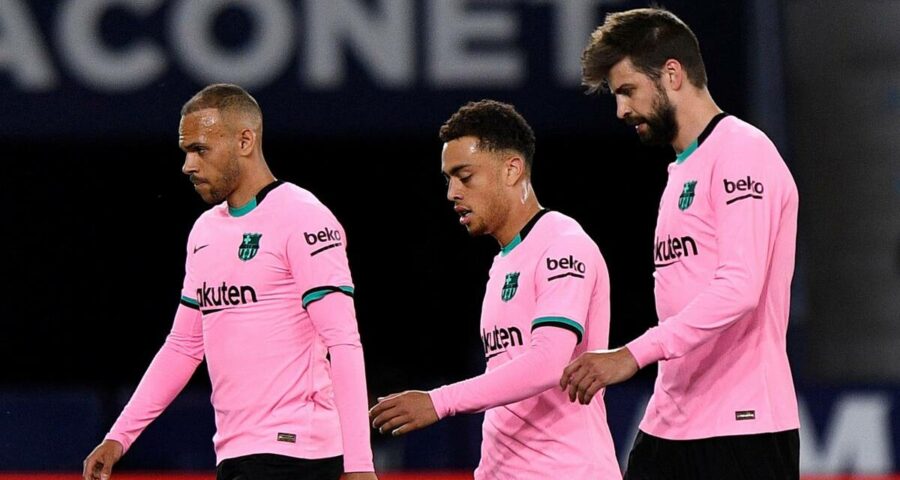 Barcelona has missed yet another chance to reach the top in the Spanish league after blowing a two-goal lead in a 3-3 draw at Levante. 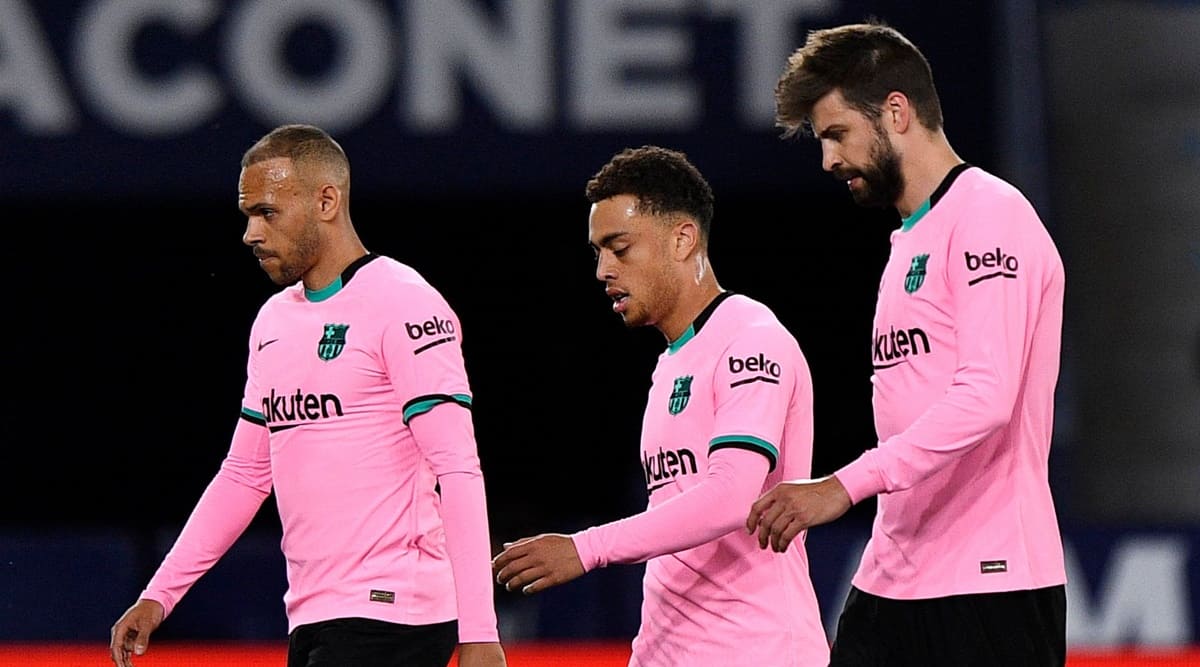 Barcelona coach Ronald Koeman stared in disbelief from the bench.

Lionel Messi walked with his head down near midfield.

Defender Clement Lenglet batted the ball away with his hands in frustration after being called for a foul.

It was another frustrating night for Barcelona in the Spanish league.

Barcelona missed yet another chance to reach the top after blowing a two-goal lead in a 3-3 draw at Levante on Tuesday.

Barcelona was up 2-0 and 3-2 but couldn’t hold on, despite knowing that a win would have put the team provisionally ahead of Atletico Madrid.

The draw left the Catalan club one point behind Atletico, which will host fifth-place Real Sociedad on Wednesday. Barcelona is one point ahead of defending champion Real Madrid, which visits 10th-place Granada on Thursday.

There will be two rounds remaining after the midweek matches.

“We have to wait and see what happens in the other games, but this was a huge step backward for us,” Koeman said. “I don’t know how to explain what happened. We played without intensity in the second half. To concede three goals in 45 minutes, it’s just too much for this team.”

Barcelona loses the head-to-head tiebreaker against both of its rivals. Madrid has the tie-breaking edge over Atletico. Sevilla also remains in contention for the title as it trails Atletico by six points ahead of its home game against mid-table Valencia on Wednesday.

Barcelona had already missed a few other opportunities to reach the top, including on Saturday when it was held at home by Atletico. It had squandered a chance to take the lead at home when it lost to Granada two weeks ago in a postponed match.

“They are scoring too easy on us,” Barcelona midfielder Sergio Busquets said. “We wanted to win and put some pressure on the leaders but it wasn’t possible. This draw means very little because it basically puts an end to our title chances.”

Messi, in what could be his last season with Barcelona, opened the scoring in the 25th minute with his league-leading 29th goal, hitting the net with a volley from inside the area after a cross by Jordi Alba that deflected on a defender and landed softly in front of the Argentina star.

Pedri Gonzalez added to the lead in the 34th with a shot from near the penalty spot after a pass by Ousmane Dembele, but the hosts needed a span of only two minutes to even the match in the second half.

Levante, sitting in 13th place, pulled closer with a header by Gonzalo Melero in the 57th, and Jose Luis Morales equalized with a shot from inside the area in the 59th after a bad pass by Messi outside the Barcelona area.

Barcelona thought it was in control again when Dembele put the team ahead again with a shot into the top of the net in the 64th, but Sergio Leon equalized again in the 83rd completing a low cross inside the area after American defender Sergino Dest slipped while trying to fend off his opponent.

The Catalan club had been one of the hottest teams this year after getting off to a slow start this season amid political turmoil and financial struggles prompted in part because of the coronavirus pandemic. It has won only five points in its last four matches, though.

Seeking its third league title in four seasons, Barcelona was as low as 13th in the standings back in the 10th round. It only made it back to the top three in the 18th round.

This is Barcelona’s first season under Dutch coach Koeman, who was back on the bench on Tuesday after a two-match suspension for using inappropriate language while complaining with a referee.

Barcelona next hosts eighth-place Celta Vigo. It visits last-place Eibar in the final round.

Second-to-last-place Elche lost 2-0 at home against Alaves, while Osasuna defeated visiting Cadiz 3-2 in a match between mid-table teams.