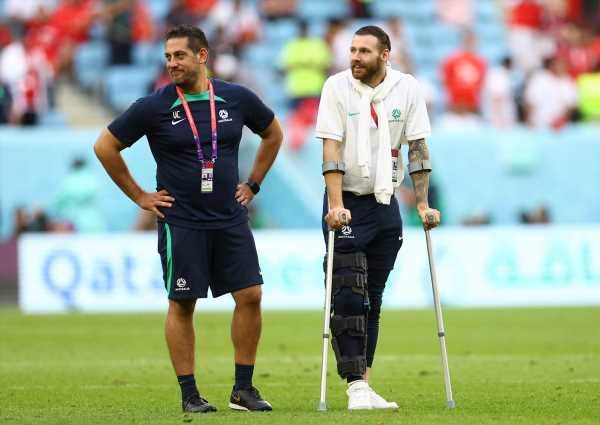 ‘There was no way he wanted to go (home), no way I wanted to send him home. He wants to stay, support and be a part’

Martin Boyle’s World Cup campaign cruelly ended even before the tournament started due to injury, but instead of relaxing on his couch back home the Australian winger has been given a new role as the team’s ‘official vibes manager’.

Boyle was ruled out of the World Cup with a knee ligament injury two days before the Socceroos opened their campaign against world champions France, with the Hibernian player undergoing surgery on his ACL.

After Australia beat Tunisia in their second game on Saturday, coach Graham Arnold brought Boyle — wearing a knee brace and walking with crutches — into the team huddle in the middle of the pitch to celebrate the win.

“We’ve moved him into the staff now as our OVM, the Official Vibes Manager, to keep the boys up, because he’s just one of the most fantastic blokes you will meet in your life,” Arnold said after the 1-0 win, their first at the World Cup in 12 years.

“Even though he’s got that injury, the most important thing for him is the rest of the boys.”

“There was no way he wanted to go (home), no way I wanted to send him home. He wants to stay, support and be a part. He deserves it more than anyone for what he did during the qualifying campaign.”

Australia’s victory moved them up to second in the table and puts qualification for the knockout stages for the first time since 2006 in their own hands after France beat Denmark.

Australia next play Denmark — who are two points behind — in the final group game while bottom side Tunisia play France, who have already sealed qualification with six points.