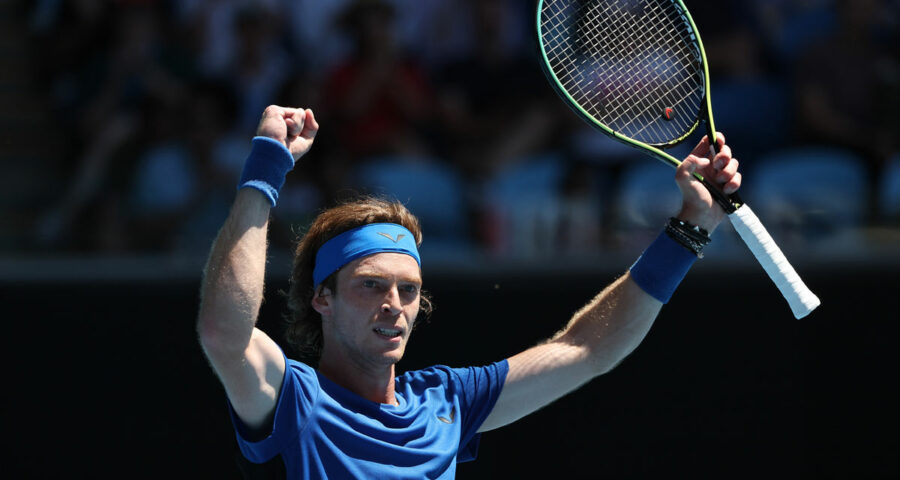 Images from Day 6 of the 2023 Australia Open at Melbourne Park on Saturday.

Fifth seed Andrey Rublev avoided a third round banana skin in the form of Briton Dan Evans at the Australian Open on Saturday after former world number one Karolina Pliskova sailed into the last 16 of the women’s tournament.

Red-headed Russian Rublev has found Evans a handful in the past but swept aside the 25th seed 6-4, 6-2, 6-3 with 60 winners on a glorious afternoon at Melbourne Park.

A quarter-finalist two years ago, Rublev had unleashed on the chair umpire in his previous match after being warned for an audible obscenity.

But it was all smooth sailing against Evans, who obligingly threw Rublev a banana during a change of ends at sun-drenched Margaret Court Arena when the Russian came up empty in his search for a snack.

“I didn’t ask him (for one), I asked the ball-boy,” said Rublev, who will meet Danish young gun Holger Rune for a place in the quarter-finals.

“He helped me with some energy, for sure.” In the bottom quarter of the women’s draw, 12th seed Belinda Bencic continued her smooth run with a 6-2, 7-5 win over Camila Giorgi in the second match at Rod Laver Arena.

Olympic champion Bencic has now racked up nine straight wins, including the Adelaide International ‘2’ title, in a near-perfect start to the season, a few months after linking up with Emma Raducanu’s former coach Dmitry Tursunov.

“It’s working really well. I’m changing some things, (going) out of my comfort zone,” the Swiss said on court.

“But I’m really happy with the start of the season.” Pliskova, renowned for being a former world number one without a Grand Slam title, beat Russian Varvara Gracheva 6-4, 6-2 in the early match at Rod Laver Arena to book a fourth round spot against China’s Zhang Shuai.

“I think the conditions here, they can be quite good for me.”