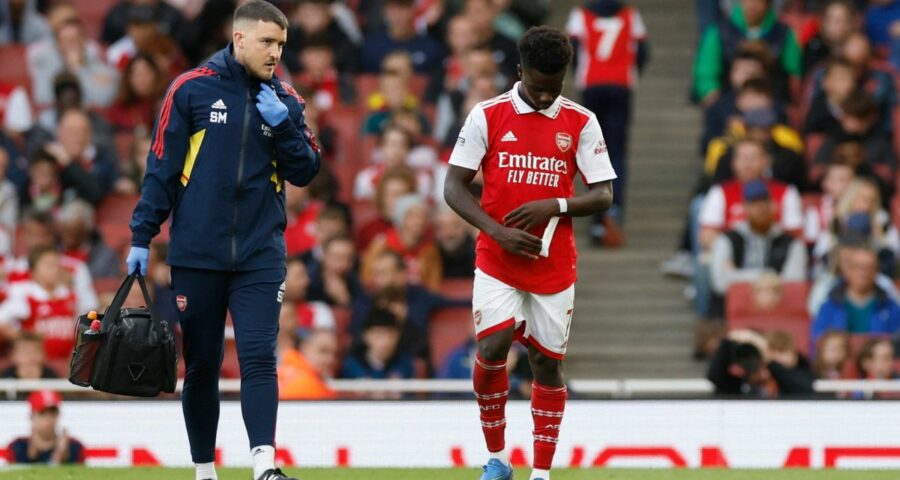 Arsenal manager Mikel Arteta is hopeful that the injury that forced Bukayo Saka off midway through the first half of Sunday’s 5-0 Premier League win over Nottingham Forest is not serious enough to keep him out of the World Cup in Qatar.

Saka set up Arsenal’s opener for Gabriel Martinelli but was felled by Forest left-back Renan Lodi shortly afterwards. He tried to continue before asking to be replaced.

It will leave England manager Gareth Southgate sweating three weeks before the start of the World Cup, where Saka could be a key figure for England, but Arteta was optimistic when asked if the injury was serious.

“Hopefully not. It was a bad kick. He was limping but I don’t see it further than that. Both the foot and ankle, he got kicked a few times,” he said.

Saka’s replacement Reiss Nelson made his first Premier League appearance since August 2021 and netted twice in three minutes in the second half for a blockbuster display off the bench.

“I’m happy for him, he’s a player that is really trying hard. He has changed and evolved a lot, even though he has not had minutes,” Arteta said.

“We have different threats and different players that can score. That is really positive. You could see the boys were looking for Gabi (Gabriel Jesus) to give him the ball to score as well,”

Jesus could not find the back of the net but did lay on two assists in a lively display that helped Arsenal to return to the top of the Premier League table, two points ahead of Manchester City.

“It is great to be there, we knew we had a difficult game ahead of us,” Arteta said.

“It is always difficult to win in this league and we knew it was a tricky game after travelling (for the Europa League in midweek). We played really well and scored some fantastic goals. It was important (to score early), it boosts the confidence and creates an atmosphere in the stadium,”