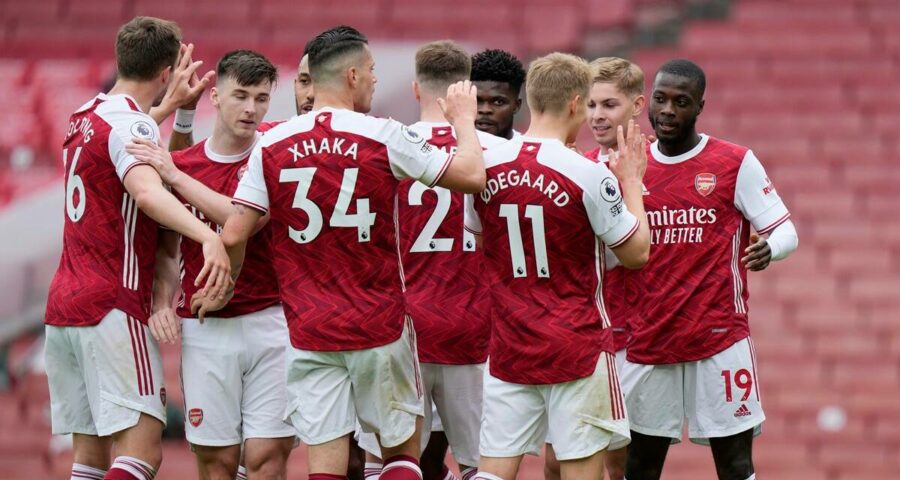 Arsenal missed out on qualifying for European competition for the first time in 25 years after finishing the Premier League season in eighth place following a 2-0 win over Brighton. Arsenal missed out on qualifying for European competition for the first time in 25 years after finishing the Premier League season in eighth place following a 2-0 win over Brighton on Sunday.

Arsenal needed to win and for both Tottenham and Everton to drop points to seal seventh place and a spot in the inaugural Europa Conference League next season.

Mikel Arteta’s team did its part, with Nicolas Pepe continuing his fine end to the season by scoring twice in front of 10,000 returning fans at Emirates Stadium.

However, Tottenham’s late turnaround in its 4-2 win at Leicester meant Spurs finished above Arsenal, its fierce north London rival.

Arsenal had to settle for an eighth-place finish for the second season in a row but Arteta is adamant the team has improved after ending the campaign with five straight league wins _ its best run in the competition since October 2018.

“It is frustrating because last season, with 61 points, we (would have finished) fifth, now we are eighth and that is the step that we have to identify. The level has gone so high so the only way to do it is to be much better next season and much more consistent and this is the challenge ahead of us.”

With muted protests against the club’s owners before the game and director Josh Kroenke watching on from the stands, this could have been a powder keg of emotions had Arsenal lost. Instead, Arteta’s side won comfortably, although it proved not to be enough in their quest to maintain a 25-year run of European qualification.

Martin Odegaard, who returns to Real Madrid after the game, showed why Arsenal are so keen to keep hold of the Norway international as he ran the show. There we also strong performances from Thomas Partey and Granit Xhaka in the heart of the midfield.