Sunday’s World Cup final turned from a one-sided affair into a nerve-racking vintage showdown and it was somehow fitting that footballing diva Argentina prevailed over France amid the drama.

Argentine, somehow, were ready for an emotional, nail-biting encounter, having already gone through a dress rehearsal in the same stadium against the Netherlands in the quarter-finals.

Leading 2-0 after 73 minutes, they were forced into extra time after Wout Weghorst’s late double, but instead of collapsing after the Dutch substitute’s equaliser 11 minutes into stoppage time, they rallied back to win the shootout.

They did just that again on Sunday, playing like only Argentina can, with a mix of aggression bordering on gamesmanship, sheer talent, heart and guts.

France, instead, might have entered the match with some sense of self-entitlement and were punished for it with Messi’s penalty and Di Maria’s goal at the end of a lightning-quick counter attack.

Didier Deschamps substituted Olivier Giroud and Ousmane Dembele with Marcus Thuram and Randal Kolo Muani before the break, to no immediate effect.

“Argentina have been playing a World Cup final, not us,” Deschamps said at halftime.

Kingsley Coman and Eduardo Camavinga then came on for Antoine Griezmann and Theo Hernandez, and as Kolo Muani’s influence grew, Argentina were hit by some kind of shaky legs syndrome.

Mbappe scored two within 97 seconds in the 80th and 81st, the second with a jaw-dropping volley.

But again, Argentina got back up on their feet and Messi added another from close range. The whole Argentina bench ran onto the pitch like headless chicken, but it was somehow not enough drama for a night to remember. 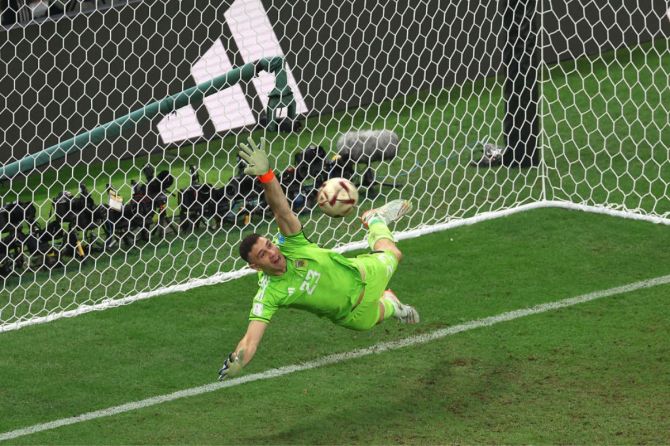 Mbappe, with ice running through his veins, made it 3-3 with another penalty two minutes from time. Di Maria, who was back on the bench, buried his face in his bib to hide the tears that were flowing down his cheeks.

One of the all-time greatest finals was to be decided by a shootout.

Argentina seemed to have the upper hand as France keeper Hugo Lloris is far from being a shootout specialist and Deschamps believes players cannot master the art of taking penalties in training.

Mbappe converted his third penalty against Emiliano Martinez but as Coman and Aurelien Tchouameni missed, Lloris was never close to saving the Albiceleste’s attempts, leaving Mbappe head in shirt, unable to celebrate his unbelievable hat-trick on the biggest stage.

France have conceded all the last 14 penalties against them in shootouts, with the last person to miss Luigi Di Biagio in the 1998 World Cup quarter-final.

After France’s shootout defeats in the Euro 2021 last 16 and 2006 World Cup final, it was a coherent end to a logic-defying final.