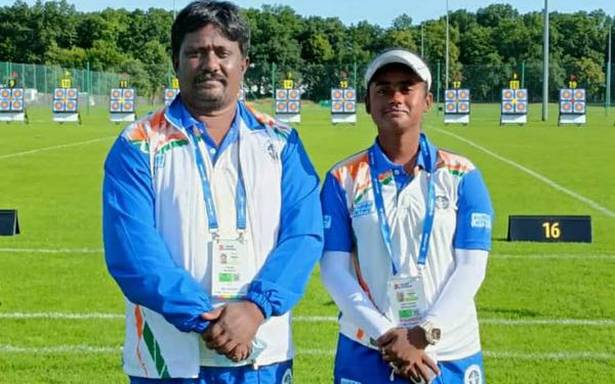 Fourteen-year-old S. Ridhu Varshini made history by becoming the first archer from Tamil Nadu to be part of the compound gold medal-winning team in the World Youth Championships, which concluded in Wroclaw (Poland) recently.

“It feels great. All the hard work that I’ve put in has borne fruit. The credit goes not just to me but to my coach (R. Yuvaraja), parents, physio and psychologist [of the Indian team] and the team led by Shihan Hussaini, secretary of The Archery Association of Tamil Nadu,” said Ridhu to The Hindu on Wednesday, after her arrival in Chennai from Poland.

Beating Turkey in the cadet (u-18) girls’ final was satisfying, Ridhu felt. She attributed the team gold to the friendship she forged with co-archers Parneet Kaur and Priya Gurjar.

“With friends like Parneet and Priya, I could see my pressure getting reduced significantly. We motivated each other,” she said.

Hailing from Coimbatore, Ridhu has been training with Yuvaraja for the past six years at his Academy named 5rings. “This is the culmination of my dream of six years. Full credit to Ridhu and TAAT for making it possible”, said Yuvaraja, who was part of the coaching staff in Wroclaw.

Ridhu is clear on her immediate target: that of winning a gold in the Khelo India Youth Games scheduled in February 2022. “I am keen to do it,” she said.