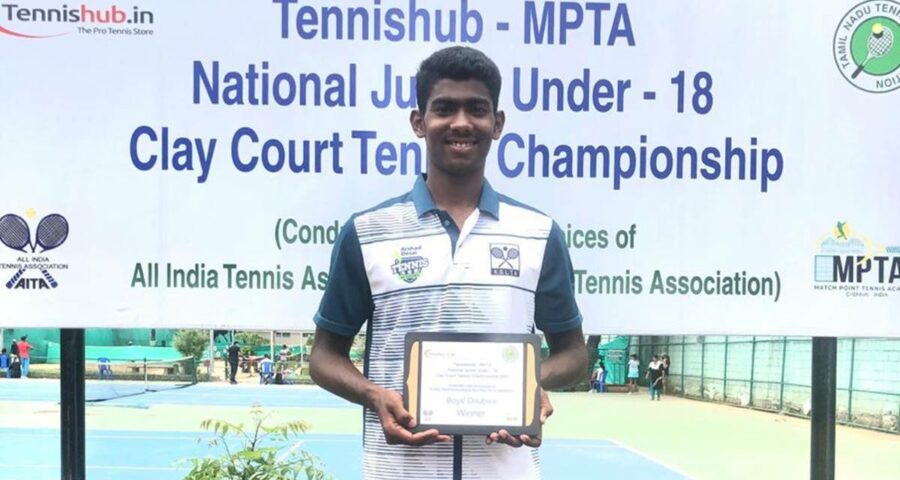 Partnering with Haryana’s Chirag Duhan, he defeated the duo of Munim Deep and Dhananjay Athreya 6-2, 7-5 at the doubles final held at Chennai on Friday. The doubles title at the National Junior U-18 Clay Court Tennis Championship 2021 is the latest feather in the cap for Kolhapur’s Sandesh Kurale — nicknamed ‘Big Server’ for his skills of perfect serves. Partnering with Haryana’s Chirag Duhan, he defeated the duo of Munim Deep and Dhananjay Athreya 6-2, 7-5 at the doubles final held at Chennai on Friday.

“I have never played with Chirag before but during the doubles we had our respective heights to our advantage. For example, when I was serving, he covered the front and covered a lot of area. Even with a few steps, we could take the ball. Our opponents were under a lot of pressure due to this. While we had the first set 6-2, due to some mistakes from our end, we could not end in straight sets. Chirag has a lot of experience playing doubles under his belt. We had exchanged our knowledge and used it to our benefit,” said the teenager.

While Kurale is delighted with the latest title, he said the expectations that stemmed from his Nationals Junior U-18 win in Indore earlier in April affected his singles matches. “I went through round one and I was 5-4 up in set two of the round two match against Dhananjay. I could have taken the game but I let the thoughts of performing get the better of me, and the match went out of my hand. Manal sir, my accompanying coach, helped me overcome the loss so that I could perform in the doubles. Chirag and I maintained a consistent game, winning rounds in straight sets to reach the final,” he said.

The 18-year-old, who trains under brothers Arshad and Manal Desai at the Arshad Desai Tennis Academy in Kolhapur, has been extensively working on the accuracy of his big serves. He said that in preparation for his upcoming participation in AITA’s Men’s tournaments, he will work alongside his coaches to strengthen his mental game.

“Sandesh’s serves are his biggest asset and that is something we have been working on. During practices, we use a coin or the cap of the tennis ball can on the court as an aim for his serves. The lack of tournaments due to the second wave (of Covid-19) affected match practices but Sandesh’s determination resulted in fruition with the doubles win. For now, we will heavily work on his mental strength,” said Manal.