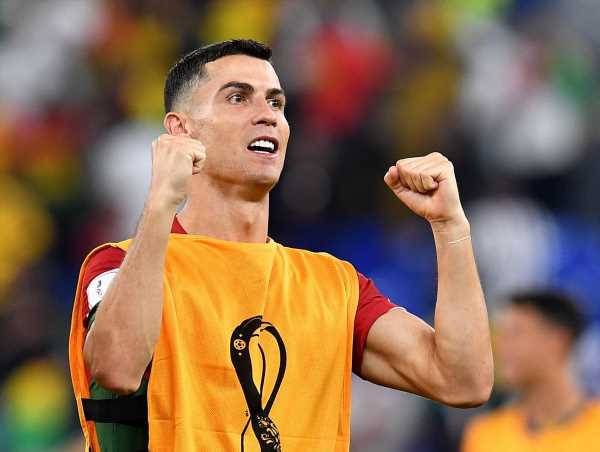 Cristiano Ronaldo swelled his World record for international goals to 118 with a penalty that made him the first player ever to score in five editions of the men’s FIFA World Cup.

Booted out by his beloved Manchester United, suspended by the Football Association and deemed over the hill by many, Cristiano Ronaldo answered everything in the best possible fashion with another record-breaking display on Thursday.

Just another week then in the glittering career of the 37-year-old Portugal talisman who attracts plaudits and criticism like no other player in the history of the game.

Two days after Manchester United abruptly ended his second stint at Old Trafford following his scathing criticism of the club, Ronaldo took out his frustration on Ghana as Portugal opened their World Cup campaign with a nervy 3-2 victory.

There had been talk that circus surrounding the five-time Ballon d’Or winner was distracting Fernando Santos’s squad.

After all, it is hardly ideal when your captain turns up in Qatar in the middle of a very public divorce with his club who he accused of betrayal.

Come game time on Thursday in Doha’s 974 Stadium partly constructed with old shipping containers, Ronaldo showed that at 37 he retains the magical knack of delivering when it matters. Ronaldo went into the match already holding the World record for international goals and he took his total to 118 in the 65th minute with a penalty that made him the first player ever to score in five editions of the men’s World Cup.

The way his team mates celebrated with him as he tucked away Portugal’s opener spoke volumes for their loyalty to their captain, every player on the pitch and the substitutes burying the forward under a pile of bodies.

Portugal’s fans behind the goal sang his name and gave him another huge ovation when he was substituted in the 88th minute.

It is easy to talk about Ronaldo in terms of statistics alone, with so many milestones chalked up.

But to watch him on Thursday, especially after a week in which he was ditched by United and sanctioned by England’s FA for breaking a young Everton fan’s phone, was to appreciate exactly what marks him out as many people’s greatest of all time.

Ronaldo was locked in from the start, working tirelessly to find spaces in and around the massed Ghanaian defence. A slightly better touch would have seen him score in the 10th minute as he was denied by keeper Lawrence Ati-Zigi and he looked truly aghast a couple of minutes later when he rose majestically in the air but headed a chance wide.

He then had the ball in the net but had his effort ruled out for a foul — but he was simply relentless in his desire to lead Portugal from the front, even if his team mate’s preoccupation with trying to deliver the ball to him became too predictable.

When his moment came it was some old-fashioned cunning to earn a harshly-awarded penalty — making sure he went down in heap after what was simply a shoulder barge by Mohammed Salisu.

Remarkably, Ronaldo has now scored in all 10 major tournaments in which he has appeared for Portugal, a run beginning when he was a fresh-faced youngster at Euro 2004.

Importantly for Portugal’s chances of going deep in Qatar, it was not just the Ronaldo show as his team mates, especially in the second half, took more responsibility.

After Ghana surprisingly levelled, it was Joao Felix who restored Portugal’s lead with a deft finish and then a sublime run and pass by Bruno Fernandes set up substitute Rafael Leao.

But the night, once again, belonged to CR7.