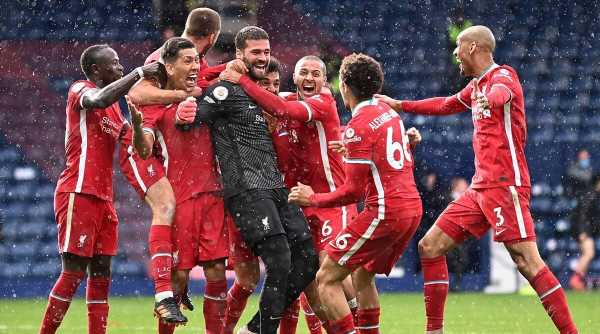 Alisson part of long South American tradition of custodians making an impact at the other end.

After the spontaneous mayhem of the moment, when he glanced a searing header beyond frozen West Brom goalkeeper Sam Johnstone, Alisson broke down. He slumped to the ground, tears rolling down uncontrollably down his cheeks, and kissed the turf. He then got onto his feet and plunged into an embrace of Mohamed Salah, clutching him tightly and crying like a child on his shoulders.

The 95th-minute goal not just secured three points for the Reds, but also kept alive their hopes of Champions League football next season.

In the most surreal moment of his career, the smiling face of his father, who was drowned in an accident in February, flashed upon the Liverpool goalkeeper’s mind. In an emotional interview with the host broadcaster, in which he choked for words, Alisson dedicated the goal to his father most poetically: “God put his hand on my head today”.

Like Alisson, his father Jose too was a goalkeeper for a local club. So was his grandfather. As is Alisson’s brother Muriel, five years his senior. Unlike most Brazilian households wherein children are taught to kick the ball before they can even walk, the Becker brothers were instructed to stop the ball (to stretch the point, his mother was a handball player). Jose wanted his sons to be like Taffarel, the hero of the 1994 World Cup final penalty shootout, and used to take his sons to club games to watch him keep.

“He was a bit crazy on the pitch, too — he’d always dive headfirst toward the striker’s feet to catch the ball. He had a really wild style. We both admired him, and his style is something we have inherited. I guess that’s how kids are, isn’t it? You see your father do something well, and you think, ‘I want to become like him,’” Alisson narrates his journey in a column in The Players’ Tribunal.

The Becker family is an aberration in the backdrop of Brazil’s fixation with goal-scorers. It doesn’t matter where they play, as long as they score goals. Fullbacks, centre-backs, wingers, centre-halves, the role doesn’t matter. “Goals, goals, goals, that’s the essence of Brazilian football consciousness,” the legendary Socrates had once so poignantly observed.

No wonder then that the record for most goals in club football by a goalkeeper belongs to Brazilian Rogério Ceni, who has represented Brazil 18 times and netted 131 goals for Sao Paulo, being the club’s second-highest goal-scorer of all-time. Growing up, Ceni wanted to be a fullback and his younger days were spent shuttling from one position to another before a school coach told him his future lay in goalkeeping. Or in the reality of Brazilian football, a euphemism for “not good enough to be an outfield player.”

It’s little wonder then that most Brazilian ’keepers are forgotten names. It’s a paradox as the country has churned out hordes of quality ’keepers as well as being one of the first national teams to hire a goalkeeping coach.

Ceni bit the snub, hung on and morphed himself into one of the finest dead-ball specialists in the continent. So much so that Zico once said, perhaps not entirely seriously, that Ceni was better than him at free-kicks. His 100th goal certainly was in the Zico class, wherein he scored with the sumptuous finesse of a playmaker, with nothing more than a caress of his instep. More than a goalkeepers’ punt, Ceni scored with the purpose and precision of a natural goal-scorer. He was blessed with considerable wit too. “I can stop goals. I can score them too,” he said after scoring a goal against Corinthians. In a more serious mood, he once explained his hunger for goals to Globesport: “I just wanted to show the world that if you want to score goals, you could score from anywhere. Nothing could stop you. It’s an instinct, you cannot destroy it.”

That then was the era of goalscoring ’keepers. Colombia had the quixotic Rene Higuita, who took his merry scoring ways into the Venezuelan league, by the time he was well over 40. There was the charismatic Paraguayan José Luis Chilavert, who almost scored the first goal by a goalkeeper in the World Cup against Bulgaria. His celebrations were as memorable —a dive that ended as a belly flop. There were less frequent goal-scorers like Brad Friedel, Laurent Monde, Charlie Williams and Peter Schmeichel, but it remained largely a South American quirk, where roles (and life itself) are less rigid and defined.

It was speculated to be the next big leap in football’s evolutionary cycle. It was not to be. It was too unnatural to be commonplace.

But Brazilian football honed the ball-playing skills of the goalkeepers, and made them comfortable with the ball at the feet. Around the same time in Europe, goalkeeping was being revolutionised as a result of the high lines of attack and emphasis on the pressing game. Custodians were no longer confined to their netted caves or deputised to stopping shots, but soon became the origin of attacks, the starting point of counterattacking thrusts, and executioners of goal-bound free-kicks. Managers like Pep Guardiola base their tactics on the game flowing through the goalkeepers. And hence, goalkeepers are picked not just for their reflexes or organisational skills at the back, but their vision and ability to conceive goals. From keeper to sweeper-keeper, now there is the playmaking-keeper.

It’s no coincidence that the goalkeeper with the most twinkling feet and eye for goals is a Ceni protege, Manchester City’s Ederson. Ceni was the youth coach when Ederson began as a midfielder for Sao Paulo, before he was repackaged into a fine ’keeper with excellent passing skills and long distribution range. Alisson, a typical modern-day ’keeper, too has an impressive passing repertoire — in his Roma days, he had the penchant for the back-heel that often had the defenders’ hearts in their mouths. And now has emerged perhaps the long-suppressed goalscoring instinct.

Alisson or Ederson might not end up as Ceni, but in the sheer desperation of the moment, a Brazilian can be trusted to stick his head out and score a goal. It’s after all the essence of being a Brazilian footballer — to score goals.

And for all the goalkeepers they have produced, the Becker household has a goal-scorer too.