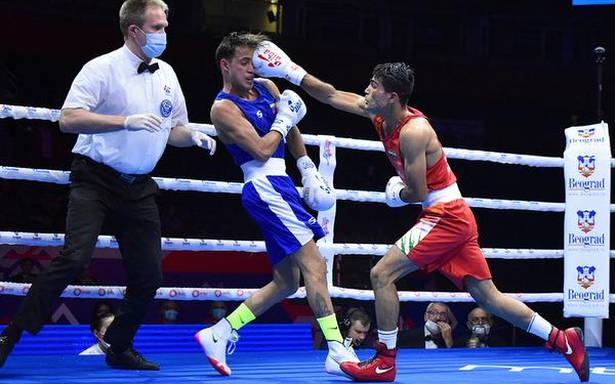 The 21-year-old Akash prevailed 5-0 in a fabulous performance during which his punching and showmanship were outstanding.

He scored on counter-attacks with a non-existent guard and taunted his opponent, all this while staying out of his range with terrific pace and footwork. “My strategy was to attack right from the start, I won the first round with that and in the second, I had to protect my cut as well while going forward, which I managed to do,” Akash said.

The Services boxer, a product of Army Sports Institute in Pune, lost his mother to a lung infection in September and competed in the Nationals unaware of the tragedy.

“I dedicate this medal to my late mother and father and my coaches. I competed in such a big tournament for the first time in my life and I feel so proud to have done well,” Akash added.

High Performance Director Santiago Nieva said: “His performance has earned him a lot of respect from his opponents. For a debutant, he showed tremendous confidence against boxers who were far more experienced.”

Akash is also assured of a prize money of at least $25,000. He will be up against 19-year-old Makhmud Sabyrkhan of Kazakhstan, a three-time Asian gold-medallist at the youth level.

Rivas had won a bronze at the Rio 2016 Olympics but his medal was upgraded to silver after the second place finisher failed a dope test.Narender Berwal (+92kg) bowed out, losing 5-0 to Azerbaijan’s Mahammad Abdullayev.