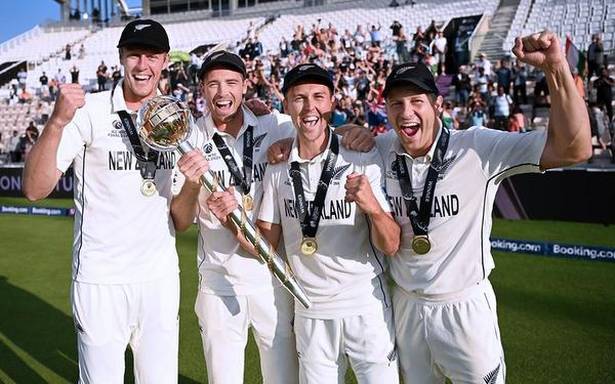 Jamieson lends the finishing touch to a professional attack

In his heyday, he earned the sobriquet Sultan of Swing. Now, in the evening of his life, his words carry immense wisdom.

The second Test of the 2019 India-New Zealand series was in progress at Christchurch, Sir Richard Hadlee’s eyes scan the ground, his steely gaze picking up little things.

In the middle, the Indians were crumbling, and the man doing the damage was Kyle Jamieson, all of 6’8”.

“We never had someone like him before. Perhaps in the ’50s, but none after that. Nobody with his height and natural bounce,” Hadlee was speaking to The Hindu. “He adds another dimension to the New Zealand bowling,” said Hadlee.

The legendary bowler’s words were ringing in the ears when Jamieson pinned the batsmen on the back foot with his lift and, with their footwork disrupted, consumed them with fuller length and swing to scalp five in the Indian first innings of the ICC World Test Championship final at Southampton.

And then he opened up the Indian batting on the final day, setting Virat Kohli up with deliveries moving into him and taking him out with one that left the right-hander. Soon, he had Cheteshwar Pujara snapped up in the slips.

New Zealand’s pace was always probing, but Jamieson has lent it the cutting edge with his pace, lift, off-stump line, seam movement and swing. And, he changes his length so adeptly.

With the arrival of Jamieson, New Zealand’s pace attack is complete. After all, you have the left-right combination of Trent Boult and Tim Southee, who between them, have over 600 Test wickets. They come from varying angles, pitch the ball up, allow it to swing and dare the batsmen to go after them. So confident are they of defeating the batsmen with their movement.

The ever-evolving Southee has added the delivery that straightens and holds its line or comes in, to his trademark outswingers. Ask Rohit Sharma who was bamboozled by one such delivery in the second innings.

And, Boult is a bag of tricks. The left-armer bowls with equal control from over and round the wicket, can take the ball away from the left-hander from over the wicket and angle it across the right-hander and bring the odd one back.

The talented Boult can get the ball to deviate both ways from round the wicket. He is a serial scalp-hunter.

Then there is the never-say-die Niel Wagner, all heart, effort and commitment, whose barrage of accurate short-pitched bowling is mixed cleverly with fuller length left-armer’s swing whether angling it across or bringing it back. New Zealand, clearly, has the pace attack to be at the acme of Test-playing nations.