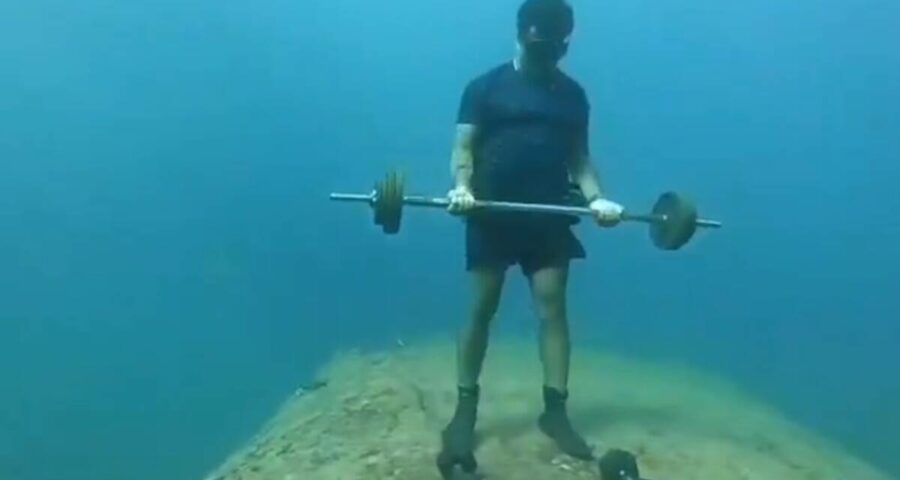 Seen wearing protective eye gear, the man worked out on the seabed after having dived 14 metres underwater It is extremely essential to keep oneself active and exercise regularly to build immunity, especially amid the pandemic. To highlight the same and draw attention to the importance of fitness, a Puducherry man took to exercising underwater and shared it in a video that has now gone viral on social media. In the Twitter video, the man, reportedly a trained diver, can be seen doing dumbell and barbell curls underwater as fish swim by.

Seen wearing protective eye gear, the man worked out on the seabed after having dived 14 metres underwater.

The video was posted by a local journalist Pramod Madhav with the caption, “Man from Puducherry does exercise 14 metres in deep water to emphasise the need for exercise during the pandemic.” The video has garnered hundreds of views and likes on the social media platform.

Health experts have often emphasised the importance of exercising to stay healthy and combat the virus. Apart from exercise, a nutritious diet also plays a crucial role.

“Exercising every day also helps in releasing different hormones like endorphins, the happy hormones, that help in lifting the mood and make one feel energetic and enthusiastic. Dopamine, norepinephrine, and serotonin are also released and they increase focus and attention. Exercise also serves as a distraction from the daily struggles and overthinking that comes with illnesses,” said Utsav Ghosh, fitness trainer and founder, Transformation for Good.

“Fitness always has been important in keeping the memory sharp and increasing focus. It helps in a positive increase in one’s self-esteem and also better sleep and energy,” he added.