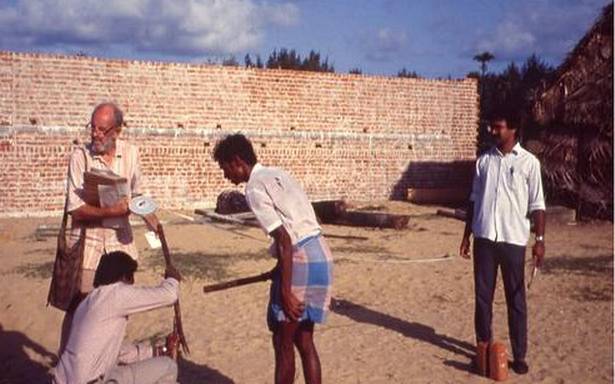 Renowned architect Laurie Baker’s underlying principle was to give everyone a place to live. “He never thought about creating architectural wonders, making an extravagant statement to the world with his architecture or putting his signature on the building. He always believed that the building should be the reflection of a person living in it and not the architecture,” says Sandhya Kannan, the curator of the exhibition titled Laurie Baker: A tribute to the architect of DakshinaChitra. The exhibition that is on till January 30 is a tribute to Baker who designed and created the museum at DakshinaChitra. It reflects upon the simplistic and minimalistic designs of the architect. Sandhya mentions an instance from Baker’s life where a man with a 15-member family wanted a house built with a budget of ₹10,000, which Baker did.

“We are trying to show different aspects of Baker’s personality. Ideas such as being eco-friendly, sustainable and down to earth. In the exhibit, we will be displaying artifacts such as Baker’s construction plans, letters, photographs and short books that he wrote on brick work, using mud. There will also be resultant documents of surveys taken by DakshinaChitra on the vernacular architecture in the country,” she says.

Baker primarily used mud and bricks in his construction, something that is found off the soil, and within a few miles of the construction site. He believed that it was not necessary to go too far and wide to procure materials in order to build a house. His architecture in Kerala is an example of this. He used materials such as jackfruit tree wood and laterite soil to build houses, which his student Benny Kuriakose later went on to popularise. Kuriakose too contributed towards the Kerala section of DakshinaChitra.

“Why spend a fortune on non eco-friendly building material when you can spend a lot less on eco-friendly material that’s found in Nature in abundance,” says Sandhya shedding light on Baker’s eco-friendly mindset. Baker also had an objective to change the way people approached accommodation in non-sustainable and impractical ways which consisted of grand looking buildings and grandiose architecture.

The exhibition is on between 10am and 5pm at Varija Art Gallery, DakshinaChitra Museum.