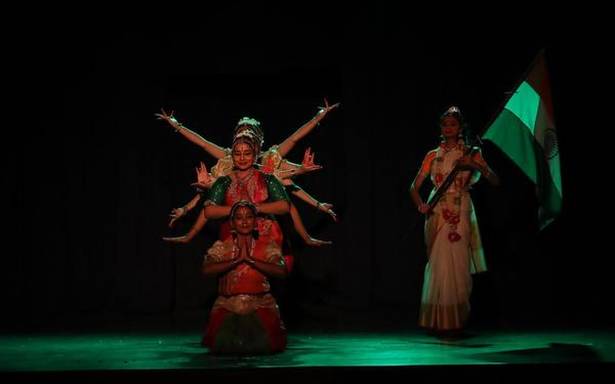 Puli Thevar, Velu Nachiyar, Marudu Sagodharargal, Veerapandiya Kattabomman, V.O. Chidambaram, Bharathiyar and Kodi katha Kumaran are freedom fighters from Tamil Nadu, but barring a few popular names, most people may not be much familiar with others. So it was a good idea to present their stories as an ode to these freedom fighters and to commemorate 75 years of Independence.

Srekala Bharath and students of Thejas, her dance school, presented ‘Veeram Vilayndha Bhoomi’ at Bharatiya Vidya Bhavan’s Natya Utsavam. Beginning with salutations to Mother India by a group of young dancers, the narrative moved from one story to another with one of the youngsters playing the protagonist. A few roles were performed by Srekala herself.

The use of folk tunes and the visualisation of some sequences such as ships on sea in the episode on VOC were interesting. Scenes from the battlefield and freedom fighters being hanged to death were depicted as part of the theme, but were not backed by powerful dramatisation, imaginative choreography, or aesthetic lighting design. For a production that focuses on historical personalities, it’s important that the characters are fleshed out well, or else it could appear like a list of events, defeating the very purpose of the production.

Script and music was by Rukmani Ramani. Popular songs like ‘Endru thaniyum indha’, ‘Parukkule nalla naadu’, ‘Achamillai’ and ‘Vetri ettu dikkum’ were woven into the musical score. The musical team consisting of L. Narendra Kumar on nattuvangam, Chitrambhari Krishnakumar on vocals, Veda Krishnan on the mridangam, K.R.Venkatakrishnan on rhythm pad and Ganesan on the violin, performed with a competence borne out of experience, but somehow fell short of bringing in the nationalistic fervour into their music. Thejas dancers Nivedita, Ramyapriya, Abhirami, Kshiraja, Vyomini and Divyashree performed with Srekala, who had choreographed the production and designed the costumes.