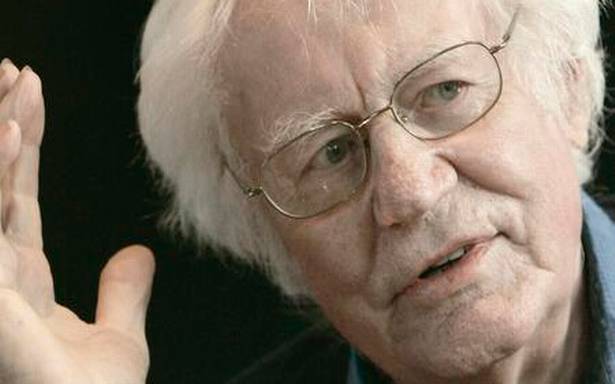 ‘Iron John: A Book About Men’, his meditation on modern masculinity was released in 1990, and spent more than two years on the New York Times Bestseller List.

Robert Bly, one of the most prominent American poets of the last half century and author of the best-selling men’s movement classic “Iron John,” has died. He was 94.

Bly, an active poet, writer and editor for more than 50 years and a celebrated translator of the work of international poets, died Sunday at his home in Minneapolis after suffering from dementia for 14 years, his daughter, Mary Bly, said.

“Dad had no pain. … His whole family was around him so how much better can you do?” she told The Associated Press.

Bly published his first book of poems, “Silence in the Snowy Fields,” in 1962. He won the National Book Award in 1968 for “The Light Around the Body,” a book of Vietnam War protest poems. Bly donated the $1,000 prize money to the draft resistance movement.

But the native of the western Minnesota town of Madison gained his greatest fame for a work of prose called “Iron John: A Book About Men.” His meditation on modern masculinity was released in 1990, and spent more than two years on the New York Times Bestseller List.

The book helped launch a new men’s movement, but also angered some feminists and drew some ridicule by summoning images of bare-chested businessmen gathering in the forest to beat on drums and howl at the moon.

“The media dismissed all this work as drumming and running in the woods, which reduced it to something ridiculous,” Bly told the Paris Review in a 2000 interview. “I think the men’s seminars were not threatening to the women’s movement at all, but a lot of the critics of ‘Iron John’ missed the point.”

Born on his family’s farm near Madison in 1926, Bly later said he first started writing poetry in high school to impress a beautiful high-school English teacher. After a brief stint in the Navy, he landed at Harvard in 1947 and found himself surrounded by some of the leading lights of the country’s literary scene, such as the late Adrienne Rich, a classmate of his who became a prominent feminist poet and writer.

From there it was on to New York City — he sometimes slept at Grand Central Station when he couldn’t find an apartment to crash — and then a year at the Iowa Writer’s Workshop. Bly returned to Minnesota where he’d live for most of the rest of his life.

Back in Madison, Bly and another local poet started a poetry magazine they dubbed The Fifties (later renamed The Sixties, and then The Seventies). The inside of the front cover signaled their intention to rattle the literary establishment with this warning: “Most of the poetry published in America today is too old-fashioned.”

“Up until then, there was a kind of academic lock on mainstream poetry. It all looked like very Victorian and kind of refried, stuffy, complacent,” said Thomas R. Smith, a longtime friend to Bly who worked for many years as his assistant, and has co-edited several books about him. “He defied the convention that all the important poetry was coming from the coasts and the college campuses, and carved out some new space for the poets of the American Midwest.”

In addition to writing poems influenced by his predecessors and peers in other countries, Bly also labored to bring their original work to U.S. readers. Over the years, with the help of native speakers, Bly translated several dozen poets from a number of languages. Several poets he translated and championed, including Chile’s Pablo Neruda and Sweden’s Tomas Transtromer, would go on to win the Nobel Prize in Literature.

“The translation work is an amazing part of his legacy in its own right,” said Jeff Shotts, executive editor at Minneapolis-based Graywolf Press, which published some of Bly’s translations and other work.

With his tall, burly physique and a thick shock of wild hair — gone snow white in his later years — Bly cut a striking figure. His poetry readings were frequently rollicking affairs: He often donned masks or colorful shawls, cracked jokes and gestured wildly, and had a habit of reading the same poem twice in a row.

“He’d say that the first time the poem got stuck in your head, but the second time it can get down in your chest,” said James Lenfestey, a fellow poet who was Bly’s neighbor in Minneapolis for many years.

George Borchardt, his agent for several decades, recalled one of his readings in New York City.

“I remember it was packed and people were really hanging on to every word. He was a terrific reader,” the agent said.

Mr. Borchardt also remembered Bly as a pleasure to represent.

“He was not the kind of author who needed guidance in his writing,” he said.

Bly and his first wife, Carol, divorced in 1979; he moved to Minneapolis soon after. Bly is survived by his second wife, Ruth, whom he married in 1980, four children — Mary, Bridget Noah, Micha Bly and stepdaughter Wesley Dutta — and nine grandchildren.

Over the years, Bly published more than two dozen poetry collections, multiple translations of other poets’ works and a handful of nonfiction books of which “Iron John” was the most well-known.

Mr. Smith said “Iron John” had its roots in Bly’s coming to terms with his relationship to his father, a taciturn Norwegian farmer.

“That led to an examination of what it is to be a man,” Mr. Smith said. “He saw American men at a crossroads. He was concerned that men were losing their inner lives, their feeling lives, their connection with stories and traditions and literature. But the caricature became that he was John Wayne with a drum. That’s the opposite of what he was.”

Mary Bly said funeral services would be private. She urged fans to send memorial donations to their favorite poetry associations.

“He was a great poet and a great dad,” she said.