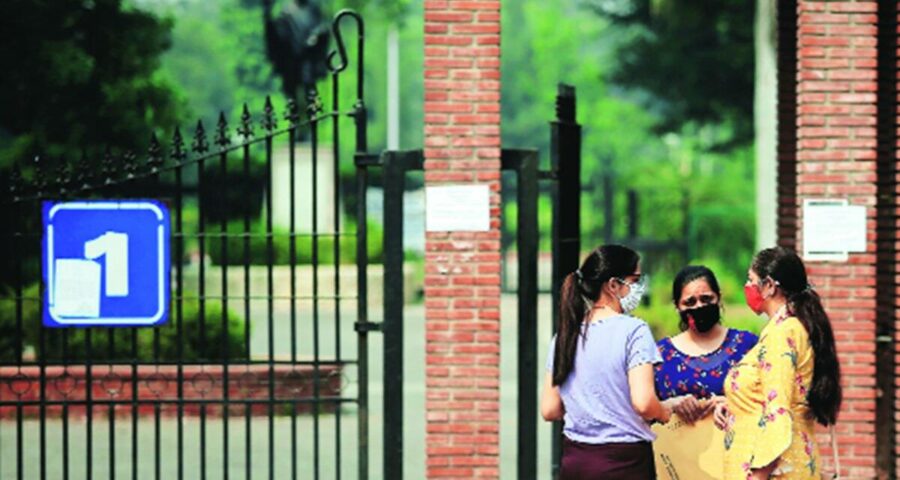 Final-year students who need access to laboratories and have practical classes will be allowed to return to colleges and departments in February, Delhi University’s Dean of Students’ Welfare (DSW) said Wednesday. However, theory classes will remain online.

“DSW Office organised meetings with college principals on January 5 and with the heads of departments on January 6 regarding the graded entry of final-year students in their respective colleges and departments. The vice-chancellor chaired both the meetings and dean of colleges, director — South Campus, DSW and the Registrar also participated in the meetings,” DSW Rajeev Gupta said in a statement.

“Both meetings had detailed discussions about UGC’s guidelines dated November 5, 2020, which have considered the graded entry of the students back to their colleges and departments. DU will also slowly and carefully start allowing only final-year students to their respective colleges and departments for their laboratory and practical classes in smaller groups. Their theory classes shall remain in the online mode. However, students’ entry will be absolutely voluntary,” he added.

Students get to decide

The Dean of Students’ Welfare has said the process of allowing students to return to access laboratories will begin in February. The month of January will be devoted to preparing standard operating procedures, so that all faculty members are well versed with it. However, students will get to decide whether they want to return or not.

Gupta told The Indian Express that the process of allowing students to return should start in the beginning of February. “The remaining part of January will be devoted to understanding the guidelines and preparing SOPs (standard operating procedures), so that all faculty members are well versed. Most likely we will start by February 1. But it will be completely optional. Students will get to decide whether they want to come back or not. We will not force anyone,” he said.

The Delhi University Students’ Union (DUSU) had also submitted a memorandum to the DSW and the librarian of Central Reference Library demanding phased reopening of libraries and colleges. They also demanded a mobile app which should give “easy access to DU Library online”.

On the demand, Gupta said, “I received their representation and I will send it to the appropriate offices.”

Earlier, the All India Students’ Association (AISA) and the Students’ Federation of India (SFI) had also demanded reopening of the DU campus citing digital divide as an issue. However, Gupta said opening colleges and campuses to all students was not feasible. “We have to see how many (students) we can handle and then only proceed,” he said.