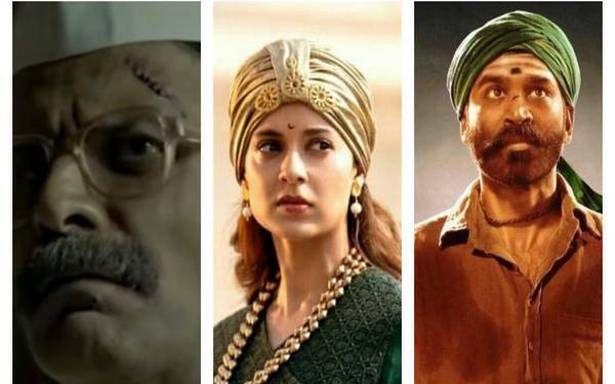 In what could be seen as a thumbs up to nationalist narratives, Priyadarshan’s Marakar Arbikadalinte Simham was chosen as the Best Feature Film and Sanjay Pooran Singh Chauhan won the Best Director Award for Hindi film Bhattar Hoorain at the 67th National Film Awards announced on Monday in New Delhi.

Manoj Bajpayee and Dhanush have shared the Best Actor Award while Kangana Ranaut has won the Best Actress awards, announced by the chairman of the central panel N. Chandra. The announcement of awards was delayed by almost a year because of the pandemic.

Headlined by Mohanlal, Marakar Arbikadalinte Simham or the Lion of Arabian Sea is a period action drama about a 16th Century Malayali naval chieftain who fought the Portuguese invasion. Chauhan’s film is a dark comedy about the consequences of violent extremism. This is only his second film after Lahore that won him the Indira Gandhi Award for the best debutant director in 2010. Both the films have yet to make it to theatres because of the COVID-19 situation.

While Mr. Bajpayee has been awarded for his measured performance of a retired police constable in Bhonsle, Mr. Dhanush has won it for depicting a range of emotions in Vetrimaaran’s multi-layered revenge drama Asuran. Ms. Ranaut bagged the award for her varied performances in Manikarnika: The Queen of Jhansi and Panga.

Having been ignored for Aligarh and Gali Guleiyan, it has been a long wait for Mr. Bajpayee after he won the Certificate of Merit for Pinjar in 2003. This is the second National Award for Best Actor for Mr. Dhanush after he won it for Aadukalam in 2011. For Ms. Ranaut, this is her fourth National Award.

D. Immam got the Best Music Award for his songs in Tamil film Viswasam. Prabuddha Banerjee bagged the Award for the Best Background score in Bengali film Jeyesthaputro.

In his speech, Mr Chandra appreciated the emergence of sports film on different disciplines such as kabbadi and basketball. He also expressed satisfaction over filmmakers bringing alive stories of lesser known heroes of Indian history such as Lal Bahadur Shastri and Ahilya Bai Holkar.

Sikkim was awarded as the Best Film Friendly State. The award for the Best Book on Cinema went to Sanjay Suri’s A Gandhian Affair: India’ Curious Portrayal of Love in Cinema.