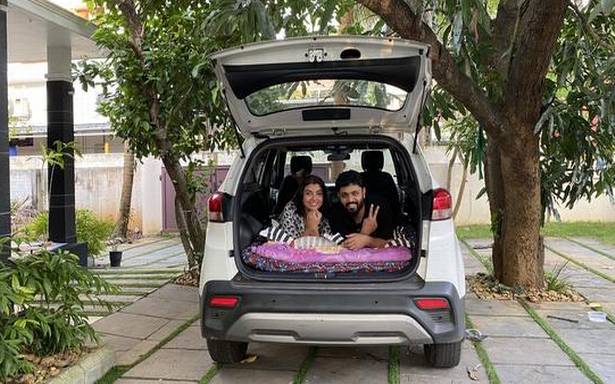 Harikrishnan J and Lakshmi Krishna from Thrissur who are on a mission to cover 13 States in their SUV, narrate the high points of their trips through YouTube channel TinPin Stories

Vlogger couple Harikrishnan J and Lakshmi Krishna from Thrissur, Kerala, are riding high on a cross-country odyssey, living out of their car. The avid travellers are on a mission to cover 13 States in their minimally refurbished compact SUV, all the while narrating the tales of their trip through their YouTube channel TinPin Stories.

When MetroPlus catches up with the couple, Harikrishnan (31) and Lakshmi (24) have made a pit-stop in Jaisalmer, Rajasthan, before gearing up to enter Punjab. “We call it a freewheeling ‘car life’ wherein we essentially travel, cook and sleep in our four-wheeler,” says Lakshmi, a graphic designer. “It has been our mobile home for months now,” chimes in Harikrishnan.

The duo, who tied the knot in 2019, first launched TinPin Stories to document its honeymoon travels in Thailand. They later quit their corporate jobs in Bengaluru to become full-time vloggers.

The couple set out on their white Hyundai Creta (automatic/petrol) from their hometown in Thrissur on October 28 last year after Covid-19 lockdown relaxations. “We had already been to places such as Himachal Pradesh and Hampi and dreamt of going on a much longer trip. Then the lockdown derailed our travel plans. A key reason we decided to travel in our own car was not to rely on public transport, keeping the pandemic in mind. Also, we felt this would help cut cost if we cooked and slept in it,” says Lakshmi.

Their original plan was to travel 12 States and come full circle in about two months, but they soon realised there was a lot to explore, relish and learn at each milestone. Starting from Kerala, their route threads Karnataka, Maharashtra, Gujarat, Rajasthan, Punjab, Jammu and Kashmir, Himachal Pradesh, Uttarakhand, Uttar Pradesh, Madhya Pradesh, Telangana, Andhra Pradesh and Tamil Nadu before making their way back to their hometown in Thrissur.

The two effected “minimal modifications” to their SUV to suit the purpose, chiefly fashioning two makeshift ‘beds’ out of the back seat with some smart ergonomics. “The back seat was folded and the headrest removed where we fixed two six-feet long plywood planks that serve as beds with 2-inch foam mattress firmly attached to it. We carry a small gas cylinder, a stove and basic cooking utensils that include a pressure cooker. A car inverter solves our power problems. In fact, we spent not more than ₹4,000 on all these for the trip,” says Harikrishnan, adding that they use a laptop, iPhone and a GoPro for vlogging.

They love to whip up dishes that are quick to make. “We prepare rice, curry, egg and poha, which we both enjoy. At other times, we resort to instant noodles to save time. Veggies and cereals are usually bought fresh on the road,” he says. Also in the boot are three 10-litre water cans, one meant for washing. Water refills are done from fuel stations.

Google map serves as their primary guide. “We both take turns to drive and navigate both highways and byways. We just go with the flow and mingle with people from different communities and do not try to stick to any particular schedule. We both can manage communicating in Hindi. However, we call it a day by 7 pm to zoom in on a convenient spot to park our car and settle for the night,” says Harikrishnan. While sleeping, a mountable power bank-charged mini-fan comes in handy while a portion of the windows is kept open.

Nevertheless, there were occasions when they had to check into hotels briefly. “So far, only a few times. That’s also when we get to do most of the laundry,” says Harikrishnan with a laugh. The couple says the only challenging part of their odyssey has been finding sufficient time for vlogging. “We keep shooting videos and clicking pictures as much as we can but editing them well for TinPin Stories and uploading the clips are time-consuming,” he points out.

So what has their ‘car life’ across the country taught them? “Be nice to people and they will be nice to you”, say Harikrishnan and Lakshmi in one voice.