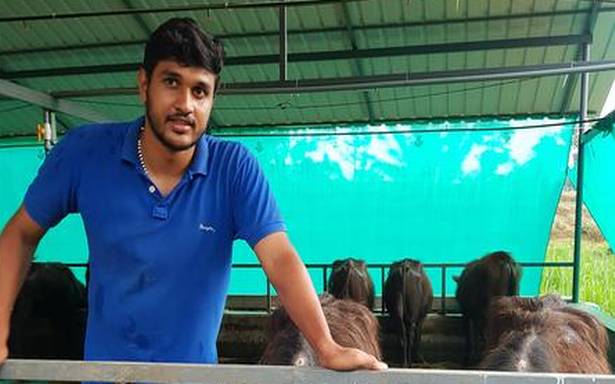 Mathew Thomas, pursuing his post-graduation, runs a farm with Murrah buffaloes at Kothamangalam in Ernakulam district

At 23, Mathew Thomas is the proud owner of a farm. At Oonukal near Kothamangalam in Ernakulam district, Mathew runs Malayil Murrah Farm, where he rears Murrah buffaloes. A postgraduate student in Biotechnology at Mar Athanasius College, Kothamangalam, Mathew hit upon the idea during the pandemic.

“When classes went online last year, I had a lot of free time on my hands. I was getting restless and wanted to do something to keep myself occupied,” he says over the phone. That was when his father’s friend suggested a buffalo farm. “I decided to give it a try. I watched several videos and collected as much information as I could, especially about Murrah buffaloes,” he says.

Murrah buffaloes, considered one of the highest milk-yielding Indian buffalo breeds, comes mostly from the states of Punjab and Haryana. “They grow faster when compared to breeds found in Andhra Pradesh and Tamil Nadu. For example, if other breeds reach 200-220 kilograms in a year, the Murrah gains double the weight in the same period. The feed is the same as that we give other buffaloes,” says Mathew.

Although his initial plan was to buy one, he decided to make it a bigger affair once his father also evinced interest. “So, we bought 32 buffaloes, all of them male calves, from Haryana a few months ago when lockdown restrictions were eased. We planned it on a big scale since we had enough land for that,” says Mathew. The farm stands on three acres and on another 2.5 acres they grow the grass (Super Napier variety) to feed the animals. He has also bought a machine to cut the grass.

The family already has a poultry farm, where they have 20,000 hens. “We grow pineapple and parts of the plant are also sliced and fed to the buffaloes,” says Mathew.

He points out that it took him nearly two weeks to get accustomed to running the farm. “Since we had 32, it was not easy. But now I have a schedule. I spend nearly four hours on the farm in the morning, cleaning the shed, bathing the buffaloes, feeding them and taking care of other things. I take care of the calves for an hour in the evening,” he says.

He has installed a fogger system in the shed to sprinkle water on the buffaloes when it is hot. A pond has also been constructed for the animals to cool off. The dung-urine slurry is used as fertilizer for the grass.

Mathew says that he hopes to run the farm alongside pursuing his studies.