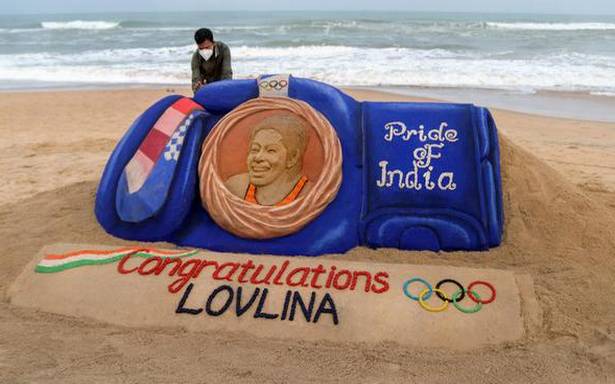 As you land in Odisha’s capital city of Bhubaneswar, you are greeted by an elegant piece of sand sculpture at the airport’s arrival hall. This installation, put up by Odisha Tourism, indicates the popularity of this art form in the State.

Sudarsan Pattnaik is, of course, the most visible name from the world of sand art, whose works have become a huge attraction for tourists visiting Odisha’s famous Golden Triangle — Puri-Konark-Bhubaneswar. This, in fact, encouraged the State government to launch an annual international Sand Art Festival seven years ago. Like Odissi, sand art has now become a unique part of Odisha’s identity.

Puri, the land of Jagannath, is known as the cradle of the 700-year-old art form. It is said that legendary Odia poet Balaram Das, who lived in Puri in the 14th century and authored Dandi Ramayan, was an ardent devotee of Jagannath. However, he was not allowed to climb up the chariot of Jagannath to offer prayers during the Rath Yatra because he belonged to a lower caste.

Dejected, Balaram went to the beach nearby and carved the images of Jagannath, his brother Balabhadra and sister Subhadra on the sand. Moved by his devotion, the three deities, it is said, vanished from the chariots and appeared before the poet.

A temple dedicated to Balaram Das has been erected at the spot where this incident is supposed to have taken place. The incident also finds mention in the poet’s work Bhav Samudra.

Though sand art goes back so many years, it was Sudarsan Pattnaik who became its modern ambassador. He adopted a contemporary approach by moving beyond divine themes to include current issues and events in the field of politics, environment, sports and arts. He has represented India in about 60 international sand sculpture championships and several art festivals, winning 27 championships and several awards. He set a Guinness World Record for creating the world’s tallest sand castle.

Sudarsan’s former colleague, Manas Kumar Sahoo, is a pioneering sand animation artist. While sand art has always been a solo act, Manas led India’s first-ever sand animation art group from his home town of Puri to the finals of the reality show, ‘India’s Got Talent’, in 2010.

Combining technology and traditional techniques, Manas has diversified into doing corporate assignments while running a sand art park at Puri. Many companies use the art form to promote their products.

Puri-based Suchitra Mahasweta, who was earlier part of Manas’ group and now works independently, has been invited by the Odisha government and UNICEF to design social awareness campaigns through sand art animation.

The increasing number of sand art institutes across Odisha indicates how the art has slowly become mainstream and how young students are finding newer ways and avenues to showcase it. When you walk along Puri beach, you find many such artists creating huge sculptures within fenced enclosures. You also find some of them teaching children free of cost.

But doesn’t the impermanence of sand art bother its practitioners? “Actually, it derives its beauty from this quality. You may not be able to hang it on the wall or display it at home, but you can store it in your memory. The medium’s versatility excites us. Create, destroy, create… the process keeps creativity flowing. Sand has given many artists like me an identity in life,” says Sudarsan.

Religious and tourism factors apart, Puri’s golden-coloured sand and moderate weather have made its shore the perfect canvas. “While Goa has white and Chennai blackish sand, the finer quality of sand in Puri helps in creating complex designs and ensures a longer lifespan for the sculptures,” says Manas. And, even though modern tools are used by artists worldwide, Puri’s sculptors are still opting to work with their hands.

Manmohan Mohapatra, who recently succumbed to Covid at the age of 59, was working wonders with sand much before Sudarsan. A favourite of tourists in Puri, he was known for his intricate works. Manmohan hailed from a family of servitors of the Jagannath temple — known as Rupakar Sevayats — who painted the gods’ chariots, and he used to present his works in Puri, Konark, Gopalpur and Visakhapatnam.

When Manmohan was invited to Mumbai for an exhibition in 1990, his talent was noticed by eminent Swiss sculptor and painter Benno Kaiser. With Kaiser’s encouragement and guidance, Manmohan participated in a major international sand sculpture festival in Canada four years later. This early recognition inspired the next generation of sand artists from Puri to pursue the art professionally.

Some years ago, the Odisha government launched its ambitious International Sand Art Festival at Chandrabhaga beach on the Puri-Konark marine drive, timing it to coincide with the famous three-decade-old Konark dance festival that takes place annually between December 1 and 5. Barely 3 km from the spectacular Sun temple, the dance festival venue, the giant sculptures attract a heavy footfall. The festival chooses one major topical issue as its theme and features around 40 sculptors from around the world.

The Bhubaneswar-based journalist writes on culture.