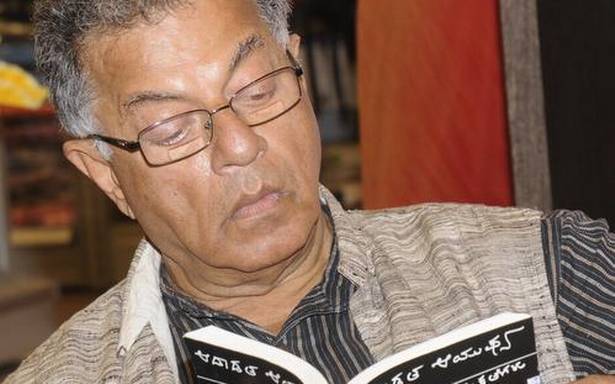 “This Life at Play: A Memoir by Girish Karnad” translated by Srinath Perur, will be released on the director’s 83rd birth anniversary on May 19 by Fourth Estate, an imprint of HarperCollins Publishers.

Girish Karnad’s memoir, which was to be translated from Kannada into English by the actor-playwright himself but could only finish a part of it before his death in 2019, will now be out in May after final touches by award-winning translator Srinath Perur.

"This Life at Play: A Memoir by Girish Karnad" will be released on the director’s 83rd birth anniversary on May 19 by Fourth Estate, an imprint of HarperCollins Publishers.

Karnad, considered one of modern India’s greatest cultural figures, first published his memoir in Kannada in 2011.

Covering the first half of his remarkable life, from growing up in Dharwad and engaging with local theatre, to his education in Mumbai and as a Rhodes Scholar in Oxford, his career as a publisher, his successes and travails in the film industry, and his personal and writerly life, Karnad’s inimitable voice shines through it all.

The no-holds-barred account provides a glimpse into the life-shaping experiences of this towering figure on India’s cultural scene, and a unique window into the India in which he lived and worked.

"Our father lived through every decade of independent India – his writing and thinking were a mirror of the life of the country, and especially its arts," say his children Radha and Raghu.

"As we told him all the time, in the later years, his career had to culminate in a memoir reflecting on that journey, and here are those reflections – brought into English in part by Appa himself, and in part by the exceptionally skilful writer and translator Srinath Perur, who was our father’s own preference to complete the work," they say.

According to Mr Perur, Karnad usually translated his own writing.

"He had started work on the English translation of his memoirs, but his health did not allow him to give it the time it required, and he called me to ask if I could help him with it. I had not read the Kannada book at the time, but I knew it had been well received by readers, and I knew it had generated some excitement in the media," he says.

"When I mentioned this to Girish, he said, ‘Yes, that is because I say the things that others don’t say.’ That honesty and plain-spokenness, qualities he was known for in his public life, also run through his book," he says.

HarperCollins India Publisher (Literary) Udayan Mitra terms "This Life at Play" an extraordinary account of an extraordinary life – the life of a pioneer and luminary of the literary and cultural world who shaped many of our contemporary perspectives on theatre, film, literature and society, and whose impact will be felt for decades to come.