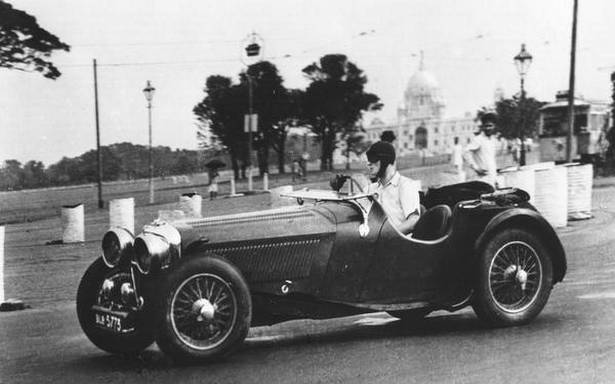 In ‘The Automobile’, author Gautam Sen chronicles the history of motor cars in India and how a passion for cars fuelled the industry even before Independence

Glitz and glamour, a need for speed and an unquenchable thirst to succeed in the field of four wheelers has paved the foundation for the automobile industry in India. Ever since 1897, when the British and Indian royalty paraded these ‘horseless wonders’, the rest of the population has viewed cars as status symbols.

In The Automobile, author Gautam Sen follows the route of the first car to make tracks on Indian shores, going down the years post Independence when a need to mass produce four wheelers took shape, culminating in the country’s offering in the sportscar sector as recent as 2020.

“Though this book has been in the writing for the past four years, some of the research that has gone into the book goes back almost 15-20 years,” says Gautam, over phone from Paris.

Gautam, who founded India’s first news-stand auto magazine in 1986, adds, “I was always interested in knowing about the past and having been in the field of motor-centered magazines since the ‘80s, I would come across specific models or certain collectors. Researching them led to unearthing a lot of historic detail.”

The book is dotted with fascinating nuggets of history. Like how the Maharaja of Nawanagar, popularly called Ranji (yes, he of Ranji Trophy fame) was the very first Indian to drive his own automobile. Or how Maharajkumar Bhupal Singh of Mewar, who was paralysed from the waist down, had a special hand-controlled Rolls Royce he could use by himself as far back as 1923.

Even as they kept up with the British, Indian rajas and members of the princely families, took to modifying the basic structure of the car to suit their personal tastes. Often bordering on the ostentatious or simply garish — zenana cars, hunting vehicles complete with a sunroof as a turret and others cutomised with cocktail cabinets and detachable spittons — were just a few of the many specimens they flaunted.

It was not long before wealthy professionals of the day began to acquire cars, and it is partly due to their efforts and passion that many vintage cars disposed off by royalty found second homes. Many rare cars such as the 1939 Delahaye 135MS, Rolls Royce Phantom II Continental, SS100 Jaguar, Lancia Astura and the likes, have been restored and housed by many across the country with a penchant for four-wheeled beauties.

While many of these vehicles are part private collections, some collectors have opened museums, giving laymen the opportunity to view these marvels — the Vintage Car Museum in Ahmedabad, the Heritage Transport Museum in Haryana and the Gedee Car Museum in Coimbatore are prime examples.

As passionate as he is about vehicles, Gautam says the portion of the book he most enjoyed penning was the part where he explores the role of automobiles in art, literature and cinema.

He recounts watching the Hindi movie Apradh as a child, back in 1972. Starring Feroz Khan and Mumtaz, the film began with its opening credits rolling over a racing sequence. “That was really disappointing, but I would wait for another amazing car race that would conclude by the 57th minute of the movie and then leave the theatre,” he says. “What is extraordinary is that the racing sequence was shot with actual rally racers of the day. I was able to trace Rene Herzog, one of the racers from that movie, and talked to him at length.”

Herzog, now 73, was a professional rallyist who raced with legends such as Niki Lauda. He remembers the Indian movie sequence shot at the Nürburgring F1 track in Germany, and being captivated by the beautiful Mumtaz.

Gautam includes anecdotes from other members of the film fraternity passionate about their cars. From yesteryear movie stars such as Salim Khan and Raj Kapoor, to actors Mehmood and Jackie Shroff, a dazzling range of historic vehicles have been (and still are) in their possession.

With his brand of barbed humour, Gautam has not shirked from calling a spade a spade, while recounting the debacles of the colonial rulers of our past or the despotic ‘desi’ ones post-Independence. From Sanjay Gandhi’s botched handling of the Maruti project and the all-encompassing miasma of red tape in India, to the unprecedented success of the Nano abroad and India’s infamous track record with hosting international rallying events, Gautam tells it as it is.

“The fact is that whatever I have said has been supported by documented evidence. These are hard facts, and I have been as balanced and objective as possible, he says, adding, “One needs to have opinions; you need to be able to say that look, this is where we went wrong and where things didn’t go right,” says Gautam.

The once-ubiquitous Ambassador, Fiats, Mahindra jeeps and Premier Padminis all find a place in The Automobile. And since it is a book on the history of vehicles in India, there is also a chapter on bikes and the fascination they hold for many Indian women — not just docile two wheelers but assertive, aggressive motorcycles.

‘The Automobile’ is available in bookstores and online