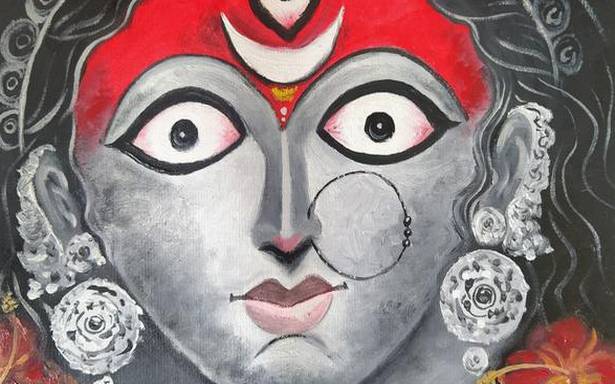 Dasara evokes a sense of nostalgia for artists; we caught up with Madhukar Mucharla, Komakula Rajashekar, Debabrata Biswas, Sumanto Chowdhary, and Madhumita Das as they share their renditions of the festive season

Madhukar Mucharla’s Durga portrait is straight from the heart. Currently on his residency at Chippa Sudhakar’s studio, the artist is inspired by the story of a migrant worker from Parigi in Vikarabad district of Telangana. “Reverse migration among workers is a sad reality,” he says.

Having used leather to highlight the loss of occupation among the migrant labour force, Madhukar elaborates “Making leather products is a source of livelihood for the Madiga community. The intricately stitched artwork is a symbolic representation of the work and place of origin.”

Adding that he saw his father toil in leather making, he shares, “The one and a half feet portrait carved out of leather is modelled in the form of a village goddess — big eyes, nose rings, ear studs and head gear decorated with layers of flowers.”

Dasara evokes a sense of nostalgia for artist Komakula Rajashekar who did his MFA in Kolkata. “It was fascinating to see how people plan and prepare for the pandals three months prior to the festival,” he remarks.

A printmaker who also loves to sketch, Rajashekar’s work on a acid-free mount board reflects divinity. With an eye for detail and intricate patterns on the crown and ornaments, Rajashekar has used a mix of acrylics and watercolours to create Durga in a contemporary style.

Interestingly, the artist who often sketches a Ganesha during Vinayaka Chavithi celebrations has attempted a Durga form. “I keep my Ganesha sketch during the puja and later frame it. The Durga sketch is for my memories and to keep the festival spirit high.”

If there is one thing that artist Debabrata Biswas wants to forget it is the human misery of COVID-19. “My canvas is for hope,” says the artist who hails from Jamshedpur and has lived in Hyderabad for 21 years now.

The artist combines art and deep devotion to create two artworks — one representing the goddess’ face and the other symbolic of the joy felt during the chanting and aarti during a Durga pooja.

The acrylic canvas depicts symbolic elements of Shakti — dhaak, trishul, lotus and the demon. “The festival spreads happiness and stands for humanity and equality in front of the goddess,” says the artist adding it is a new beginning. “The goddess leads us from the front asking us to forget the past and make a fresh start.”

After using metal craft, wood, reverse painting on acrylic sheets as mediums, this year the artist has opted for mixed media on wood.”

Durga with a cubist approach is an emblem of power and exuberance. She is sublime in appearance, yet beholds devotees with blessings. The goddess here is ‘Celebrated a constructive way, in geometric forms. Her martial and regal forms evoke awe,” he says of his artwork.

The first step in creating the four-feet-tall idol was to assemble 28 pieces of wood; he then carved out out patterns, fixed them with glue and then painted it.

“The big work needed a lot of detailing and planning,” he says. Sumanto has also created a drawing depicting how one can use the goddess’ weapons of discipline, service, prayer, cheerfulness and prayer to slay the demons of negativity, pessimism, greed and fear.

With a specialisation in sculpture, painting and printmaking, artist Madhumita Das (wife of artist Sumanto Chowdhary) gave a new dimension to wooden pieces at home. “I didn’t change the shape but just arranged them to create a form,” she shares.

With a prayer for the pandemic to end, the Ashtabhuja goddess or ‘the one with eight limbs’ is depicted carrying her weapons to protect the good and destroy evil.